When voters look for the latest breaking news and political commentary during an election, they turn to Twitter to find it directly from the source. That can range from a journalist reporting from the campaign trail, a government office providing voting resources, or a politician sharing their stance on an issue.

With just under a year until US Election Day and two months until the first votes are cast in the Iowa caucus, we’re launching two initiatives that will help people find original sources of information on Twitter by clearly identifying political candidates.

First, we’re bringing back Election Labels, which we first launched during the 2018 US midterm election. These labels received overwhelmingly positive feedback from voters and candidates, and they played a prominent role in election conversation: In the week before Election Day, people on Twitter saw Labeled accounts approximately 100 million times each day, and 13% of US election conversation on Twitter included a Tweet with an Election Label.

Second, starting this week, we’ll start identifying candidates who qualify for the primary ballot for US House, US Senate, and Gubernatorial races with a verified badge.

For both primary candidate verification and Election Labels, we are partnering with Ballotpedia, as we did in 2018, to utilize their expertise in identifying the official campaign Twitter accounts of candidates.

What are Election Labels?

Election Labels provide information about political candidates, like the office they are running for, their state and district number, and contain a small ballot box icon. The Label will appear on the profile page of a candidate’s Twitter account and on every Tweet sent and Retweeted by the candidate’s account, even when embedded on sites off of Twitter. See below how the labels will look: 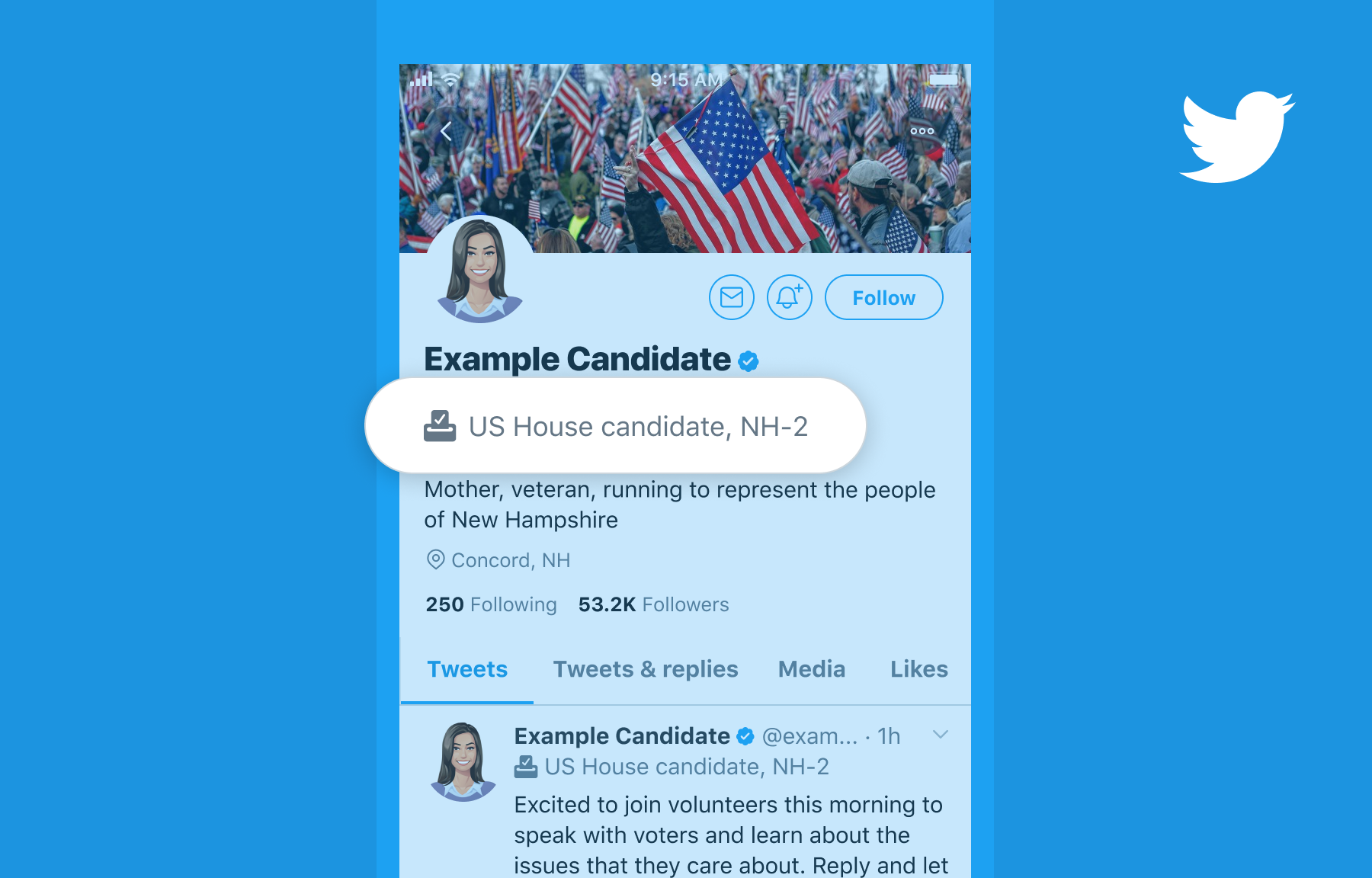 Which candidates will qualify for election labels?

Labels will appear on the Twitter accounts of candidates running for US House of Representatives, US Senate, or Governor in the 2020 US election who have qualified for the general election ballot.

When will election labels appear?

You’ll start seeing Labels appear on applicable candidates’ Twitter accounts once the candidate has qualified for the general election ballot. This will happen on a rolling basis as states have different caucus and election dates, with the first occurring on March 3rd.

Which candidates will be verified and when?

Starting today, Twitter will begin verifying the campaign Twitter accounts of candidates who have qualified for primary elections for the US House of Representatives, US Senate, and Governor, and have been identified by our research partners at Ballotpedia. Again, this will happen on a rolling basis as states have different filing deadlines.

Twitter is partnering with Ballotpedia, a civic nonprofit organization that publishes nonpartisan information on federal, state, and local politics, to help identify the campaign Twitter accounts of candidates once they qualify for the general election ballot for an applicable office.

Stay tuned as we continue to focus on building tools that better enable people to find quality news and have informative conversations on Twitter.

In order to receive a verified badge, candidates who qualify for the primary ballot for US House, US Senate, and Gubernatorial races must:

Attempts to abuse this system diminish the integrity of the conversation on Twitter regarding elections. If a Twitter account engages in, or has engaged in, activity that violates the Twitter Rules, it may be ineligible for verification or subject to enforcement action.

This Tweet is unavailable
This Tweet is unavailable.
Only on Twitter
Tweet Twitter logo icon
Tags:
Link copied successfully
More from Company
Leveraging the power of Twitter to combat the opioid crisis
By on Tuesday, 23 April 2019
Imperfect, by design
By on Friday, 29 January 2021
Coronavirus: Staying safe and informed on Twitter
By on Tuesday, 12 January 2021
National Disability Employment Awareness Month 2020 with Twitter Able
By and on Friday, 30 October 2020
See what's happening