The world’s window into the European election conversation

This May, millions of citizens from across the European Union’s (EU) 27 Member States will have their say on the future political complexion of the European Parliament. The second largest democratic exercise of its kind in the world in 2019, the European elections will have a major impact on the region’s geopolitical outlook and priorities for the next five years.

Twitter is committed to serving the public conversation around this major global event. As a real-time, live service, we seek to be the world’s window into the critical conversations happening right across Twitter between candidates, voters, journalists, political parties and groups, civil society, and electoral commissions. We’re already working proactively to support and protect these conversations, and today we’re detailing some of the additional steps we’re taking ahead of #EUElections2019.

Expanding our political campaigning ads policy across all Member States
Our political campaigning ads policy is being expanded to cover #EUElections2019, providing the general public with an additional layer of insight into who is running a political campaign ad on Twitter. The policy, which is also being expanded into India and Australia today, means that an ad endorsing a party or a candidate will be viewable in our Ads Transparency Center, where you will be able to see details such as billing information, ad spend, and impressions data per Tweet. Additionally, we will be showing demographic targeting data for the ads being served. The ads will exist indefinitely within the Transparency Center, where they are viewable by anyone in the world, regardless of whether or not they own a Twitter account. 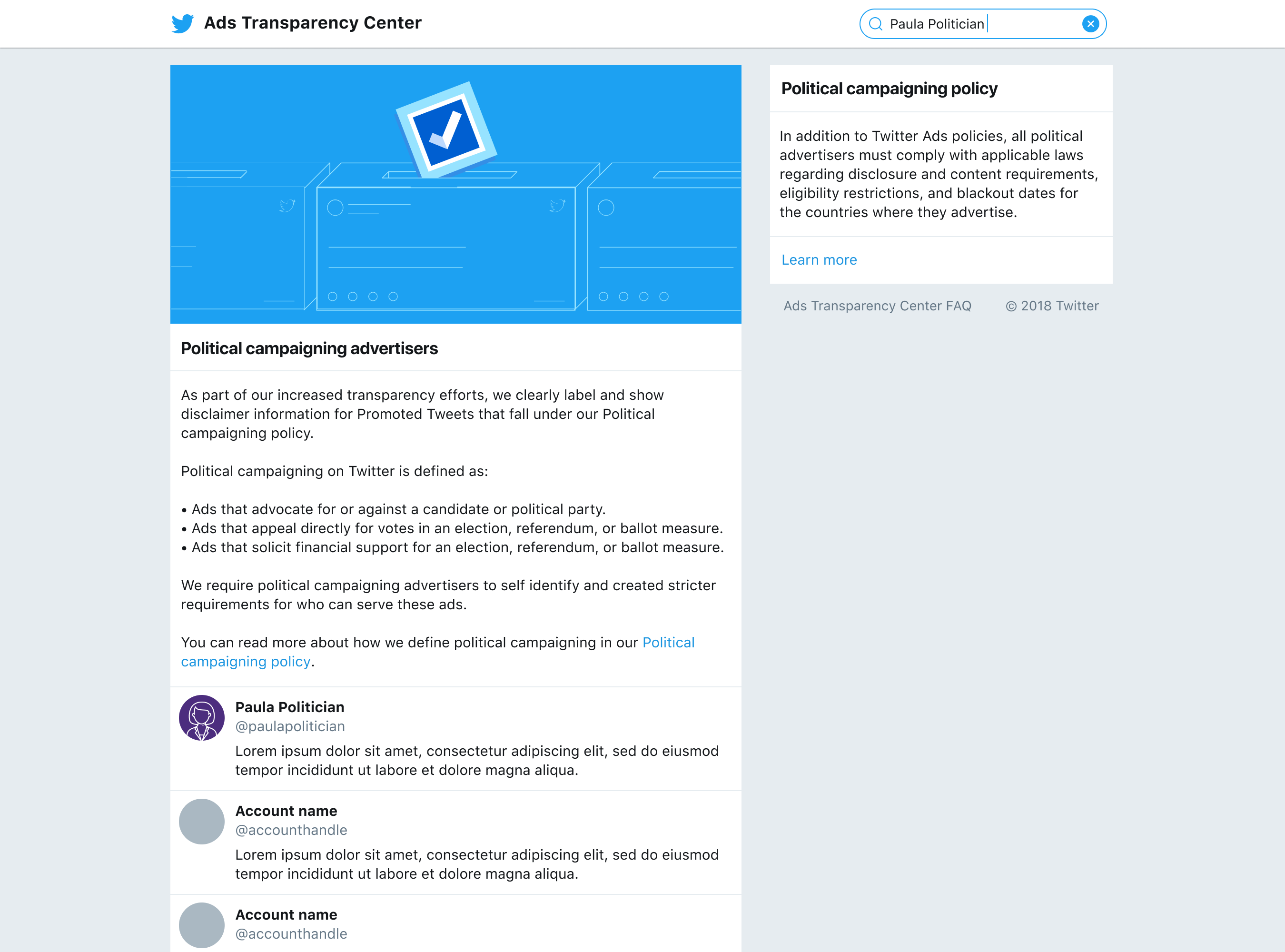 In addition to the information being shared within the Ads Transparency Center itself, we are making it clearer who is advertising European political campaign content on Twitter by including a visual label and disclaimer information on promoted content from certified accounts. This will allow users to easily identify political campaign ads and to know who paid for them. 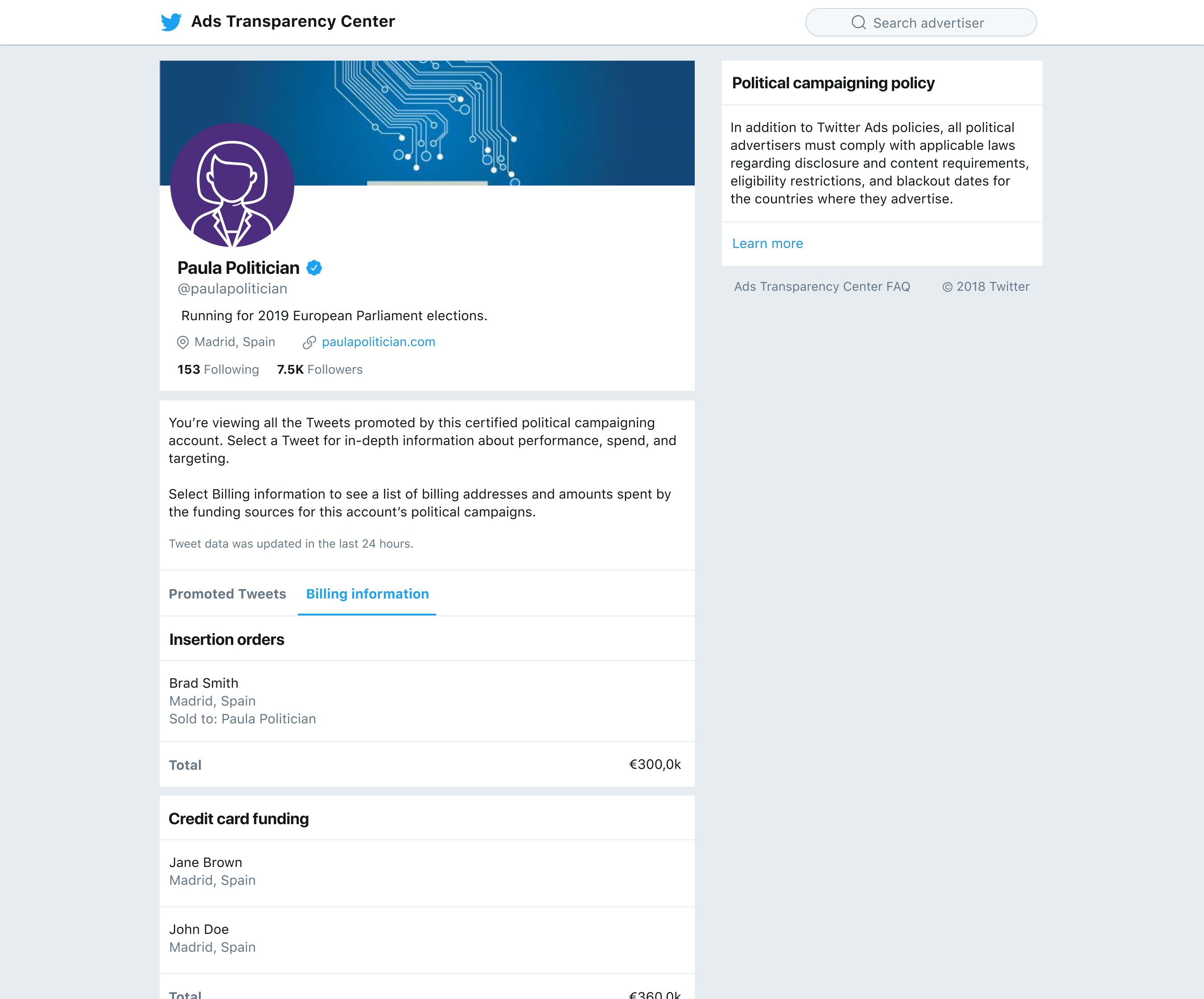 To qualify for the policy, candidates, organisations, and individuals seeking to advertise political campaigning content must now undergo a thorough certification process. Once proof of identity is verified, and advertisers meet our eligibility requirements, a letter with an access code will be posted to their address to confirm they are located within the EU. This will ensure that only EU-based individuals can advertise political campaign content on the service.

We will expand this policy to country-level elections in the future, as our teams continue to develop their operational and tooling support.

Cross-functional by design, the team consists of several of the company’s top trust and safety experts, as well as members of our site integrity, legal, engineering, data science investigations, and our public policy teams in Europe. This blend of perspectives, expertise and backgrounds is absolutely critical.

It also mirrors the model we put in place for the internal teams who directed our proactive efforts during recent elections in Germany, Sweden, Mexico, the US, and Brazil. As we move forward, we will continue with this model of bringing in additional expertise and personnel who can augment our approach, growing the experience level from one critical election to the next.

Promoting media literacy and healthy campaigning on Twitter
In the coming weeks and months, our public policy team across Europe will ramp up their engagement with political parties and the EU’s local Member State offices to arrange Twitter trainings, distribute media literacy resources, and to promote healthy, constructive participation in the democratic process.

We’ll continue to identify candidates for verification, amplify campaigns that encourage voter participation and launch a special election emoji to encourage engagement and conversation. We’ll provide updates on this work when we have more information.

As the world’s window into the public conversation around #EUElections2019, Twitter is prepared to play its part in enhancing access to healthy democratic discourse.

This Tweet is unavailable
This Tweet is unavailable.
Only on Twitter
Tweet Twitter logo icon
Tags:
Link copied successfully
More from Company
Serving the public conversation during #KoreanElection2020 amid COVID-19
By on Monday, 27 April 2020
Our #DataForGood partnership with New Zealand's NCPACS
By on Wednesday, 11 March 2020
Imperfect, by design
By on Friday, 29 January 2021
Coronavirus: Staying safe and informed on Twitter
By on Tuesday, 12 January 2021
See what's happening