Ensuring the public can find information from authoritative sources is a key aspect of our commitment to serve the public conversation on Twitter. This year, the United States Census Bureau will conduct its decennial Census, deploying resources across the country to ensure an accurate count of people living in the US. Statistics gathered by the Census are used to determine the number of seats each state holds in the U.S. House of Representatives and inform how state, local, and federal lawmakers will allocate billions of dollars in funds to local communities each year for the next decade.

Direct engagement with the Census Bureau and key stakeholders
Our outreach and close partnership with Census officials has driven our approach to keeping the conversation healthy. We partnered with the US Census Bureau in November 2019 to host a training at TwitterDC with more than 30 civil society partners in attendance that learned about Twitter's civic integrity policies and best practice content tactics. We’ve hosted a multitude of similar trainings and educational sessions for nonprofit organizations that will deploy resources to support the Census.

The Census Bureau is glad to have the help of our 2020 Census partners and technology platforms in the fight against misinformation and disinformation. There's still work to be done and we need everyone's help in reporting content intended to affect the accuracy and completeness of the count.

Twitter is also a founding member of the Civic Alliance, a nonpartisan group of businesses working together to increase civic involvement. The coalition will specifically focus on supporting participation in the Census.

Here’s what we’re doing to protect the Twitter conversation related to the #2020Census:

Dedicated Census search prompt
We’ve partnered with the US Census Bureau to launch a new tool so when someone searches for certain keywords associated with the Census, a prompt will direct individuals to the official Census site: https://2020Census.gov. This website provides clear information on the 2020 Census, how to participate, and how the Census process will safeguard individual privacy and security. 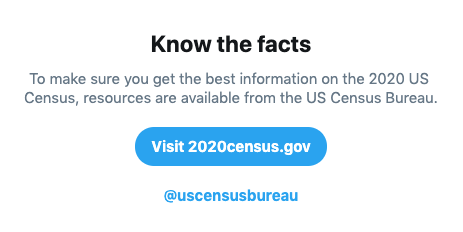 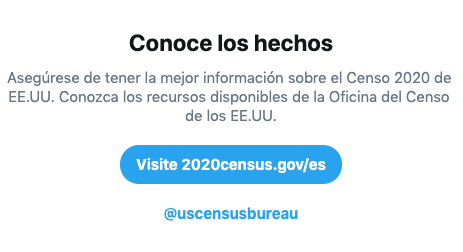 This search prompt is available on iOS, Android, and mobile.twitter.com in the United States. This is an expansion of our #KnowTheFacts prompt, which we specifically put in place for the public to find clear, credible information on critical issues.

Expanding policy enforcement to protect the Census conversation
Additionally, as part of our company-wide efforts to fight misinformation regarding participation in civic events, we’re applying our existing election integrity policy to Census-related content to make certain the Census conversation on Twitter remains healthy.