By
Monday, 3 May 2021
Link copied successfully

Today Twitter is proud to mark World Press Freedom Day, an annual reminder of our shared responsibility to support and advocate for a free press around the world.

As journalists continue to selflessly report from the front lines of conflicts, in the face of hostile interests, and, especially during this past year, risk their personal health to cover a global pandemic, we believe it is pivotal that they and their industry are supported.

To that end, Twitter is launching a campaign to spotlight, elevate and support local journalism — which is a vital resource for communities around the world, especially now for people seeking COVID-19 information.

Below we’ve outlined what we’re doing, and how you can get involved:

We’ve organized a global day of action on Twitter on May 3rd centered around the hashtag #FollowLocalJournalists. We’re encouraging everyone — prominent national reporters, journalism advocacy organizations, and everyday passionate news consumers — to share impactful examples of local journalism and elevate the reporters who contributed to it. The goal is to spotlight these reporters’ work and increase their audience.

Twitter is running an ad campaign in 28 local newspapers across the United States, including The Detroit Free Press, The Des Moines Register, The Miami Herald, and The Kansas City Star to support these outlets and amplify the #FollowLocalJournalists initiative. The ads, which will run in print and online, will direct readers to Twitter Lists of journalists created by each newspaper and by Twitter. 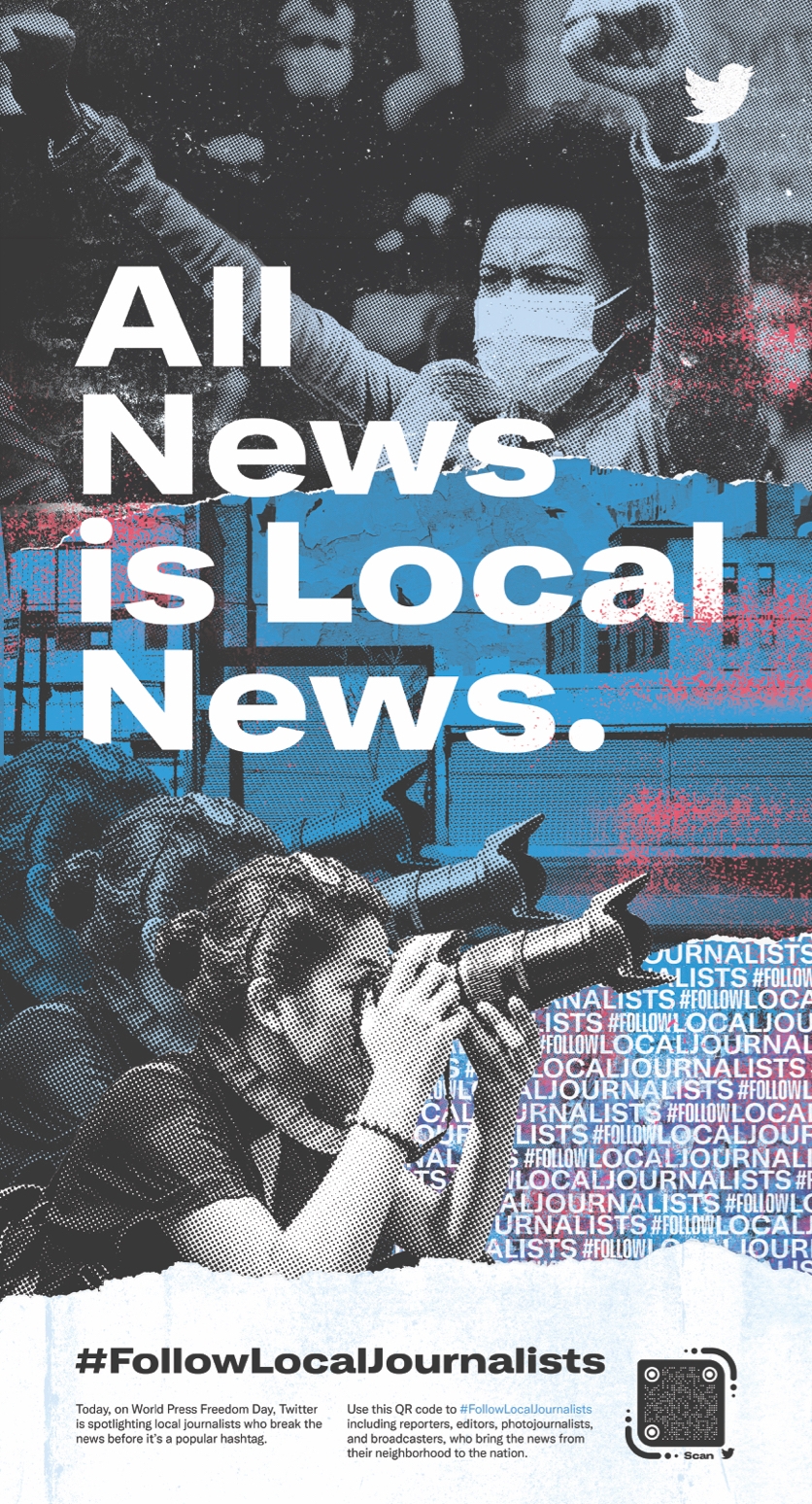 Tune in on Spaces

Twitter has organized Twitter Spaces around the world where people will be able to hear directly from journalists about the issues facing their industry, including:

Partnership with UNESCO and NGOs working on protecting journalists

Twitter has also continued our partnership with UNESCO this year to help drive conversation around World Press Freedom Day. We were proud to attend Asia Pacific Regional Consultation for World Press Freedom Day 2021 to discuss our commitment to a free press, and join UNESCO and global experts to discuss the role of technology in promoting media and information literacy. Together, we also launched Twitter emojis for the hashtags #FollowLocalJournalists, #WorldPressFreedomDay, #PressFreedom and #WPFD2021 in 20 languages.

Additionally, as a part of our commitment to freedom of expression and an open internet, we’ve provided trainings and Ads for good grants to non-profit organizations such as Committee to Protect Journalists, Reporters sans frontière, Philippine Center for Investigative Journalism, National Union of Journalists of the Philippines, Engage Media, and PEN America.

Throughout the year, #FollowLocalJournalists will be the theme of @TwitterNews’ events, trainings and advocacy work. Our commitment to strengthening and supporting a free press is year-round, so please follow @TwitterNews for updates on initiatives that support local journalism.

This Tweet is unavailable
This Tweet is unavailable.
Tweet Twitter logo icon
Link copied successfully
More from Company
Imperfect, by design
By on Friday, 29 January 2021
Coronavirus: Staying safe and informed on Twitter
By on Tuesday, 12 January 2021
National Disability Employment Awareness Month 2020 with Twitter Able
By and on Friday, 30 October 2020
Hispanic Heritage Month 2020 recap
By and on Thursday, 22 October 2020
See what's happening