Twitter stores many graphs of relationships between people: who you’re following, who’s following you, who you receive phone notifications from, and so on.

Some of the features of these graphs have been challenging to store in scalable ways as we’ve grown. For example, instead of requiring each friendship to be requested and confirmed, you can build one-way relationships by just following other people. There’s also no limit to how many people are allowed to follow you, so some people have millions of followers (like @aplusk), while others have only a few.

To deliver a tweet, we need to be able to look up someone’s followers and page through them rapidly. But we also need to handle heavy write traffic, as followers are added or removed, or spammers are caught and put on ice. And for some operations, like delivering a @mention, we need to do set arithmetic like “who’s following both of these users?” These features are difficult to implement in a traditional relational database.

We went through several storage layers in the early days, including abusive use of relational tables and key-value storage of denormalized lists. They were either good at handling write operations or good at paging through giant result sets, but never good at both.

A little over a year ago, we could see that we needed to try something new. Our goals were:

FlockDB was the result. We finished migrating to it about 9 months ago and never looked back.

It stores graphs as sets of edges between nodes identified by 64-bit integers. For a social graph, these node IDs will be user IDs, but in a graph storing “favorite” tweets, the destination may be a tweet ID. Each edge is also marked with a 64-bit position, used for sorting. (Twitter puts a timestamp here for the “following” graph, so that your follower list is displayed latest-first.) 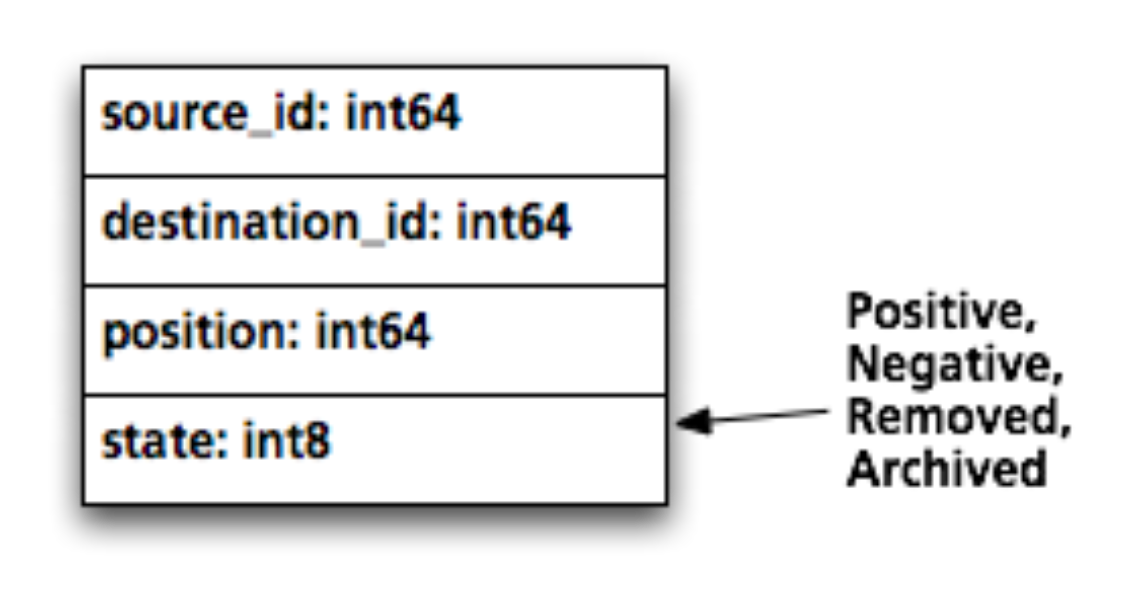 When an edge is “deleted”, the row isn’t actually deleted from MySQL; it’s just marked as being in the deleted state, which has the effect of moving the primary key (a compound key of the source ID, state, and position). Similarly, users who delete their account can have their edges put into an archived state, allowing them to be restored later (but only for a limited time, according to our terms of service). We keep only a compound primary key and a secondary index for each row, and answer all queries from a single index. This kind of schema optimization allows MySQL to shine and gives us predictable performance.

A complex query like “What’s the intersection of people I follow and people who are following President Obama?” can be answered quickly by decomposing it into single-user queries (“Who is following President Obama?”). Data is partitioned by node, so these queries can each be answered by a single partition, using an indexed range query. Similarly, paging through long result sets is done by using the position field as a cursor, rather than using LIMIT/OFFSET, so any page of results for a query is indexed and is equally fast.

Write operations are idempotent and commutative, based on the time they enter the system. We can process operations out of order and end up with the same result, so we can paper over temporary network and hardware failures, or even replay lost data from minutes or hours ago. This was especially helpful during the initial roll-out.

Commutative writes also simplify the process of bringing up new partitions. A new partition can receive write traffic immediately, and receive a dump of data from the old partitions slowly in the background. Once the dump is over, the partition is immediately “live” and ready to receive reads.

The app servers (affectionately called “flapps”) are written in Scala, are stateless, and are horizontally scalable. We can add more as query load increases, independent of the databases. They expose a very small thrift API to clients, though we’ve written a Ruby client with a much richer interface. 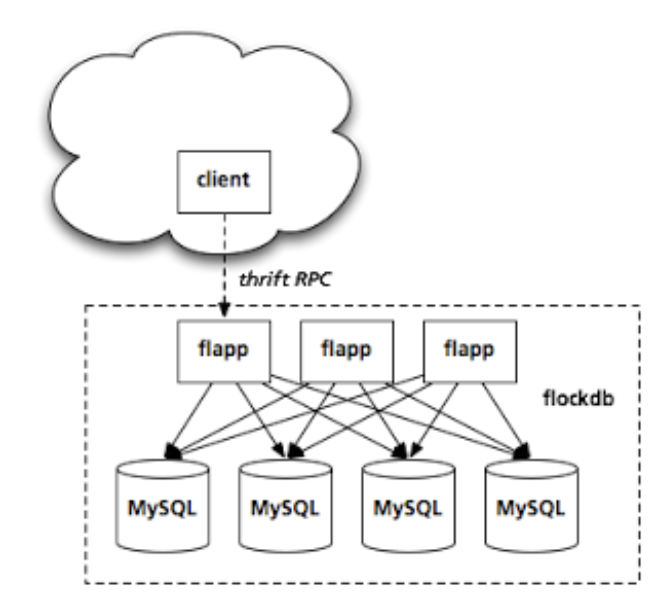 We use the Gizzard library to handle the partitioning layer. A forwarding layer maps ranges of source IDs to physical databases, and replication is handled by building a tree of such tables under the same forwarding address. Write operations are acknowledged after being journalled locally, so that disruptions in database availability or performance are decoupled from website response times.

The end result is a cluster of commodity servers that we can expand as needed. Over the winter, we added 50% database capacity without anyone noticing. We currently store over

and sustain peak traffic of

Some helpful patterns fell out of our experience, even though they weren’t goals originally:

The source is in github: http://github.com/twitter/flockdb

In particular, check out the demo to get a feel for the kind of data that can be stored and what you can do with it: