Starting today, Twitter is offering TwUI as an open-source framework (https://github.com/twitter/twui) for developing interfaces on the Mac.

Until now, there was not a simple and effective way to design interactive, hardware-accelerated interfaces on the Mac. Core Animation can create hardware-accelerated drawings, but doesn’t provide interaction mechanisms. AppKit and NSView have excellent interaction mechanisms, but the drawings operations are CPU-bound, which makes fluid scrolling, animations, and other effects difficult – if not impossible – to accomplish.

UIKit on Apple’s iOS platform has offered developers a fresh start. While UIKit borrows many ideas from AppKit regarding interaction, it can offload compositing to the GPU because it is built on top of Core Animation. This architecture has enabled developers to create many applications that were, until this time, impossible to build.

TwUI brings the philosophy of UIKit to the desktop. It is built on top of Core Animation, and it borrows interaction ideas from AppKit. It allows for all the things Mac users expect, including drag & drop, mouse events, tooltips, Mac-like text selection, and so on. And, since TwUI isn’t bound by the constraints of an existing API, developers can experiment with new features like block-based drawRect and layout.

You will recognize the fundamentals of TwUI if you are familiar with UIKit. For example, a “TUIView” is a simple, lightweight wrapper around a Core Animation layer – much like UIView on iOS.

TUIView offers useful subclasses for operations such as scroll views, table views, buttons, and so on. More importantly, TwUI makes it easy to build your own custom interface components. And because all of these views are backed by layers, composited by Core Animation, your UI is rendered at optimal speed. 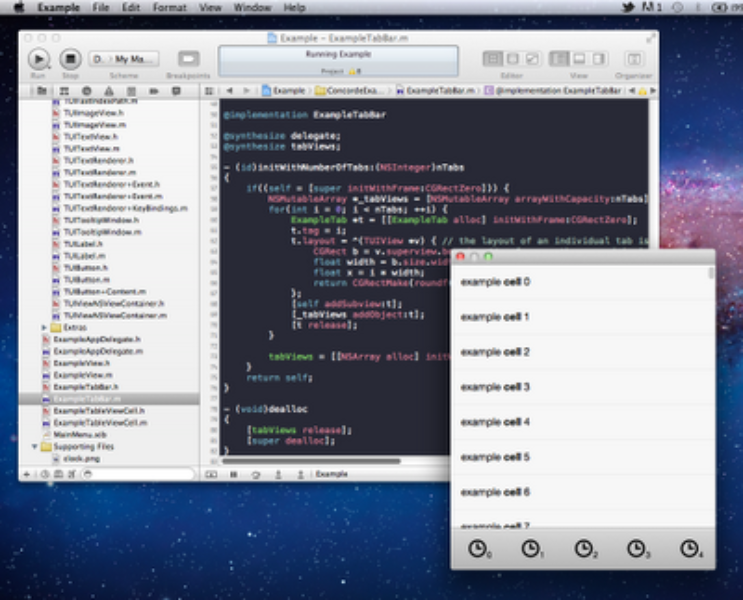 Since TwUI forms the basis of Twitter for the Mac, it is an integral part of our shipping code. Going forward, we need to stress test it in several implementations. We’ll continue to develop additional features and make improvements. And, we encourage you to experiment, as that will help us build a robust and exciting UI framework for the Mac.

The following engineers were mainly responsible for the TwUI development: