By
Thursday, 19 May 2011
Link copied successfully

In March 2011, we shared Kiji, an improved Ruby runtime. The initial performance gains were relatively modest, but laid the foundation for future improvements. We continued the work and now have some excellent results.

In Kiji 0.10, every change to the longlife heap required full recalculation of the “remembered set,” the boundary objects referenced from the longlife to the eden heap. For Kiji 0.11, we changed the calculation to an incremental model that only includes newly-allocated objects.

We made this easier by disabling garbage collection during source code parsing, which has a tendency to mutate references in place. Now, if the parser needs more memory, it merely allocates a new heap chunk. This lets us allocate all AST nodes, including those created in instance_eval, on the longlife heap. The result is a big performance boost for applications like template engines that use lots of instance_eval.

For Kiji 0.11, we now allocate non-transient strings in the longlife heap, along with the AST nodes. This includes strings allocated during parsing, assigned to constants (or members of a constant hash or array), and those that are members of frozen objects. With Ruby’s Kernel.freeze method, big parts of frozen objects are now evicted from the ordinary heap and moved to the longlife heap.

This change is significant. When the twitter.com web application ran Kiji 0.10, it had 450,000 live objects after garbage collection in its ordinary heap. Kiji 0.11 places over 300,000 string objects in the longlife heap, reducing the number of live objects in the ordinary heap to under 150,000. The nearly 66 percent reduction allows the heap to collect much less frequently.

Ruby Enterprise Edition has a set of environment variables that govern when to run the garbage collector and how to grow and shrink the heaps. After evaluating Ruby’s heap growth strategy, we replaced it with one that is much simpler to configure and works better for server workloads.

As a first step, we eliminated GC_MALLOC_LIMIT. This environment variable prescribes when to force a garbage collection, following a set of C-level malloc() calls. We found this setting to be capricious; it performed best when it was set so high as to be effectively off. By eliminating the malloc limit entirely, the Kiji 0.11 garbage collector runs only when heaps are full, or when no more memory can be allocated from the operating system. This also means that under UNIX-like systems, you can more effectively size the process with ulimit -u.

0.11 now has only these three GC-tuning environment variables:

We also reversed the order of adding the freed slots onto the free list. Now, new allocations are fulfilled with free slots from older (presumably, more densely-populated) heap slabs first, allowing recently allocated heap slabs to become completely vacant in a subsequent GC run. This may slightly impact locality of reference, but works well for us.

We replaced the old profiling methods that no longer applied with our improved memory debugging.

We also removed the “fastmarktable” mode, where the collector used a mark bit in the object slots. Kiji 0.11 uses only the copy-on-write friendly mark table. This lets us reset the mark bits after collection by zeroing out the entire mark table, instead of flipping a bit in every live object.

IT’S IN THE NUMBERS 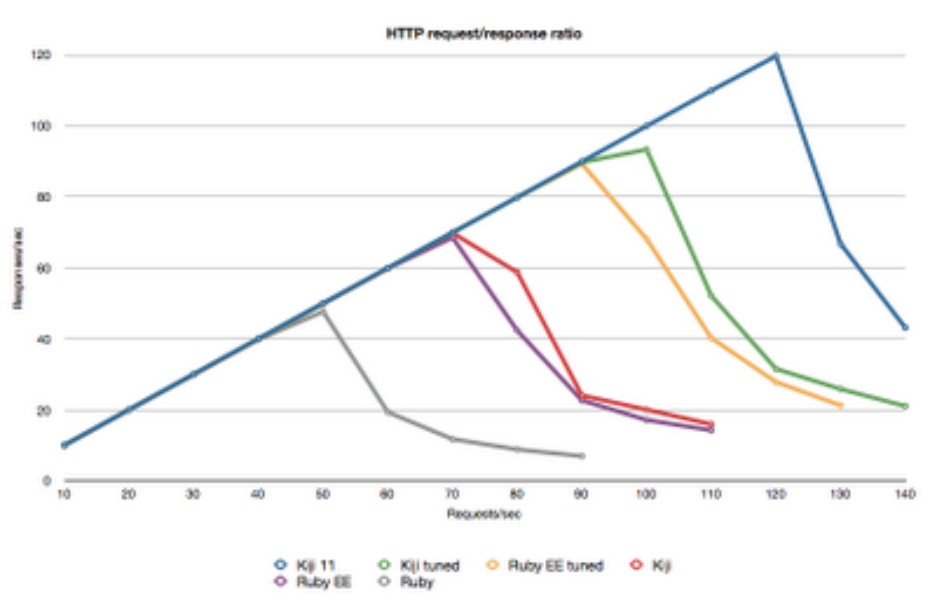 We found that in order to effectively develop Kiji 0.11, we needed to add more sophisticated memory instrumentation than is currently available for Ruby. As a result, we ended up with some really useful debugging additions that you can turn on as well.

The first tool is a summary of memory stats after GC. It lets you cheaply measure the impact of memory-related changes:

The second tool is an allocation tracer (a replacement for BleakHouse and similar tools). After each GC, the runtime writes files containing full stack traces for the allocation points of all freed and surviving objects. You can easily parse this with AWK to list common object types, allocation sites, and number of objects allocated. This makes it easy to identify allocation hotspots, memory leaks, or objects that persist on the eden and should be manually moved to the longlife.

A sample output for allocation tracing, obtained by running RubySpec under Kiji: 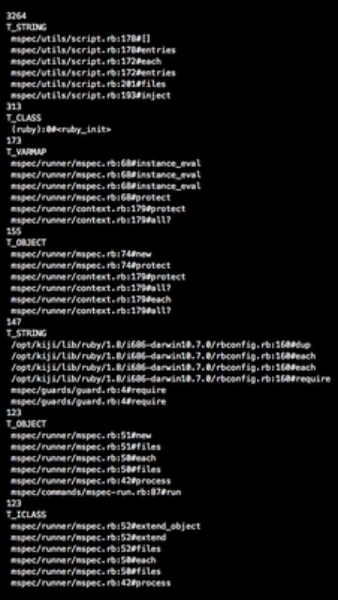 For more information, refer to the README-kiji file in the distribution.

0.11 is a much more performant and operable runtime than Kiji 0.10. However, through this work we identified a practical strategy for making an even better, fully-generational version that would apply well to Ruby 1.9. Time will tell if we get to implement it.

We also would like to investigate the relative performance of JRuby.

We have released the Kiji REE branch on GitHub.

If you want to work on projects like this, join the flock!