By
Friday, 2 May 2014
Link copied successfully

At Twitter, we know that Tweets can sometimes travel as fast as an earthquake. We were curious to know just how accurate such a correlation might be, so we collaborated with Stanford researchers to model how Tweets can help create more accurate ShakeMaps, which provide near-real-time maps of ground motion and shaking intensity following significant earthquakes.

These maps are used by federal, state and local organizations, both public and private, for post-earthquake response and recovery, public and scientific information, as well as for preparedness exercises and disaster planning.

Currently, ShakeMaps produced by the U.S. Geological Survey represent the state-of-the-art rapid shaking intensity estimation. When an earthquake happens, a ShakeMap is typically produced in a matter of minutes using a combination of recordings, a simple ground motion prediction equation, and geological site correction factors. As time progresses, the ShakeMap is continually updated as new information becomes available, including “did you feel it?” data — qualitative first-hand accounts of the earthquake collected via online surveys.

To help improve the accuracy of ShakeMaps, we used all geo-tagged Tweets around the world containing the keyword “earthquake” or “tsunami” in several languages that occurred in the first 10 minutes following Japanese earthquakes of magnitude 6 or greater from 2011 to 2012. We found that the model with lowest error was based on a combination of earthquake and Tweet-based features, such as local site conditions, source-to-site distance and the number of Tweets within a certain radius. Ground shaking intensity estimates from our model are comparable with historical recordings and conventional estimates provided, for example, by USGS ShakeMaps. 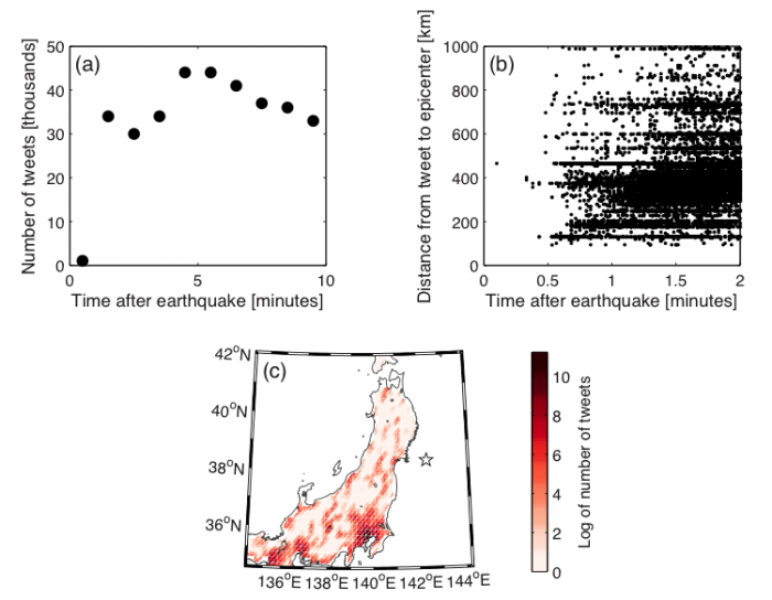 Figure 1. For the Tohoku (c0001xgp) earthquake: (a) number of geo-tagged Tweets containing an earthquake keyword per minute after the event, (b) distance between each Tweet and the epicenter as a function of time, and (c) map showing the number of Tweets, where the star represents the epicenter location.