When you run an infrastructure at Twitter scale, hardware and network failures become unavoidable. Each of these failures has the potential to negatively impact the user experience, so it’s important that we design our systems to be as resilient to failure as possible.

To test how our services react to unexpected failures, we created a framework that can inject controlled failure conditions into the Twitter infrastructure. This allows us to discover vulnerabilities so that we’re better prepared to handle a site-wide incident. By causing failures in our own system, we’re able to build more resilient services.

Our framework consists of a Python library and a command-line executable which is designed to directly introduce failure conditions into production infrastructure, monitor site-wide health metrics, and notify systems with status updates during the testing procedure. It provides a flexible, YAML-based configuration syntax and is trivially extensible with additional functionality, based around a modular design.

Targets for failure testing within Twitter’s infrastructure are selected by querying Twitter’s asset inventory database, which is the source of information for all data center hardware and associated attributes. The framework combines these queries, allowing tests to be precisely targeted against machines supporting a single Twitter service (if running on our internal cloud) or machine role.

At the moment, the framework supports the introduction of the following failure conditions:

To demonstrate how an engineer might use the framework to test a failure condition, here’s an example of a configuration which will introduce a power loss for 30 minutes across all Hadoop DataNodes in rack abc, monitor health metrics during the test’s execution, and send status updates to a chat room:

Upon passing this configuration to the framework’s command-line tool, it will gather all information necessary to introduce the failure conditions, such as the target machine hostnames and the addresses of their IPMI BMC interfaces. If this mischief preparation step succeeds, the framework will ensure that all systems under test are healthy via checking the configured monitors. It will then attempt to introduce the requested failure conditions. If these conditions are introduced successfully, the framework will pause for the configured test length, checking the configured monitors on a minute-by-minute basis to ensure that all remain in a healthy state.

A visualization of the testing process: 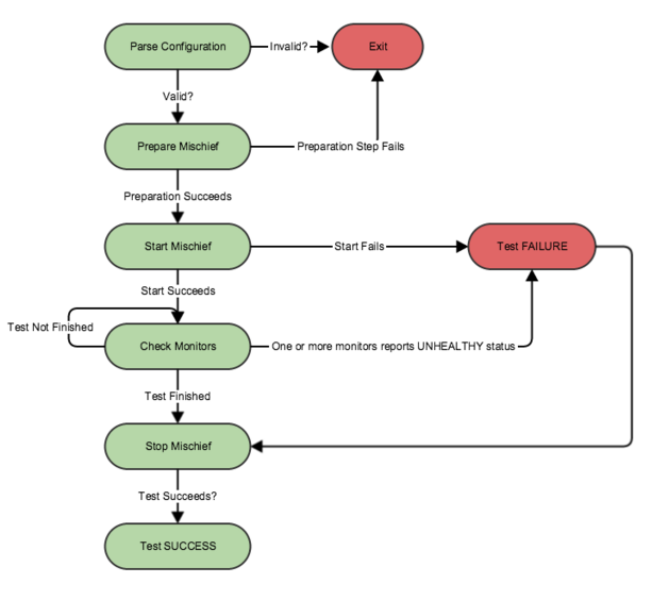 Introducing a failure condition that targets a specific service requires careful design and planning due to the heterogeneous dynamic infrastructure we run at Twitter. Services hosted in Apache Aurora are different from those that run directly on hardware as they are dynamically scheduled.

To determine the root cause of unexpected service behavior, we need to capture the full testing environment, which can include rack profiles, service types, service diversity stats, traffic volume, and more. In some cases, the anomaly we detect is simply a side effect of upstream or downstream issues or a service’s recovery behavior.

This framework has driven all failure testing at Twitter over the past six months and has helped us discover numerous vulnerabilities in our stack. In addition, it’s given us confidence in the failure resiliency of several of our primary systems, such as Apache Mesos and Apache Aurora, where we have tested large-scale failures which resulted in no user-facing impact.

An example of a common failure condition seen in our infrastructure is when a Top of Rack (TOR) switch goes bad. When this situation occurs, services running within this rack will experience either a total network loss or a partial packet loss. We learned that our services handle the total network loss case well whereas a partial packet loss will almost always cause some internal impact. We additionally found that the severity of this impact varies based on both the rack’s profile and what services are running on Mesos slaves in that rack.

The framework is able to identify how Twitter services respond to a wide variety of common hardware failure scenarios, providing site reliability engineers with substantial practical data. Much of this data surrounds how inter-service RPCs, mediated by the powerful Finagle library, behave in the face of failure conditions.

Finagle imbues all inter-service RPCs with logic to ensure that each is facilitated as successfully as possible; however, to take full advantage of this logic, downstream service clients need to be properly tuned with correct request timeout and retry values. Using data precipitated by the framework failure testing, our engineers can provide tuning values and graceful degradation logic that can better maintain SLAs and prevent user-facing incidents.

Of course, we’ll continue to test our infrastructure’s ability to withstand random failures. This framework has been used to drive exploratory failure testing to help us find and push the limits of Twitter infrastructure. As the scope of our failure testing program increases over the next few months, the framework will run continuously during work hours. By doing so, this framework will help us ensure that our resiliency to hardware failure conditions does not regress from scenarios where it has been repeatedly demonstrated. In addition, we are investigating the injection of failure conditions at the layer of our extensible RPC system, Finagle.

Through injecting controlled failure conditions into Twitter infrastructure, we can ensure that our systems will better tolerate unintended failures in production. This allows us to write services that better endure failures and gracefully degrade when needed. And ultimately by running these tests, we’re able to locate and address these vulnerabilities in our infrastructure.

If failure and reliability testing sounds like an interesting challenge, we could use your help — join the flock!

Special thanks to Steven Salevan for his contributions to this framework and blog post.