By
Wednesday, 21 May 2014
Link copied successfully

#TheVoiceAU’s Blind Auditions have wrapped up, with some truly amazing talent joining the ranks of #TeamKylie, #TeamRicky, #TeamJoel and #TeamWill. To celebrate, here’s our @VineApp recap of the Blind Auditions, and we reveal which team has created the most buzz on Twitter so far.

The Blind Auditions are renowned for creating moments that audiences want to tweet about straight away. To help them do this, @TheVoiceAU created and tweeted out six-second Vine audition videos in real time to let fans instantly share the most memorable moments from the series with their friends and followers.

Fans were encouraged to “check-in” to each new episode by sharing with their followers that they were all-set for another round of chair-spinning talent:

This year Australia welcomed back to our screens pop princess @kylieminogue, who showcased some amazing dance moves as she listened to each artist’s vocals.

Also joining the panel was @iamwill, who wasn’t afraid to show off his softer side.

Many viewers retweeted Vine videos to reflect a moment that resonated with them, such as this crush on heartthrob coach @ricky_martin.

And whenever anything funny happened on set there was only one place to get your instant replay… on Twitter!

By using @Vineapp, the producers of #TheVoiceAU were able to create instant highlights that could be shared widely on Twitter to encourage fans to tune in while the show was still on air.

So with all that great work, which coach’s team created the most buzz on Twitter? We’ve tallied the results to find out which hashtag was most tweeted during the Blind Auditions — #TeamKylie, #TeamRicky, #TeamJoel and #TeamWill — and to give you the result, here’s the winning coach himself.

#TeamRicky has been the most-tweeted about team to date with some standout auditions from the likes of @lionelmusicman, @ellyohmusic and @GarwoodMatthew to name a few.

But as we can see from the graph below, #TeamRicky has some close competition from #TeamKylie, and who knows what performances #TeamWill and #TeamJoel will deliver in the later stages to turn the competition on its head? 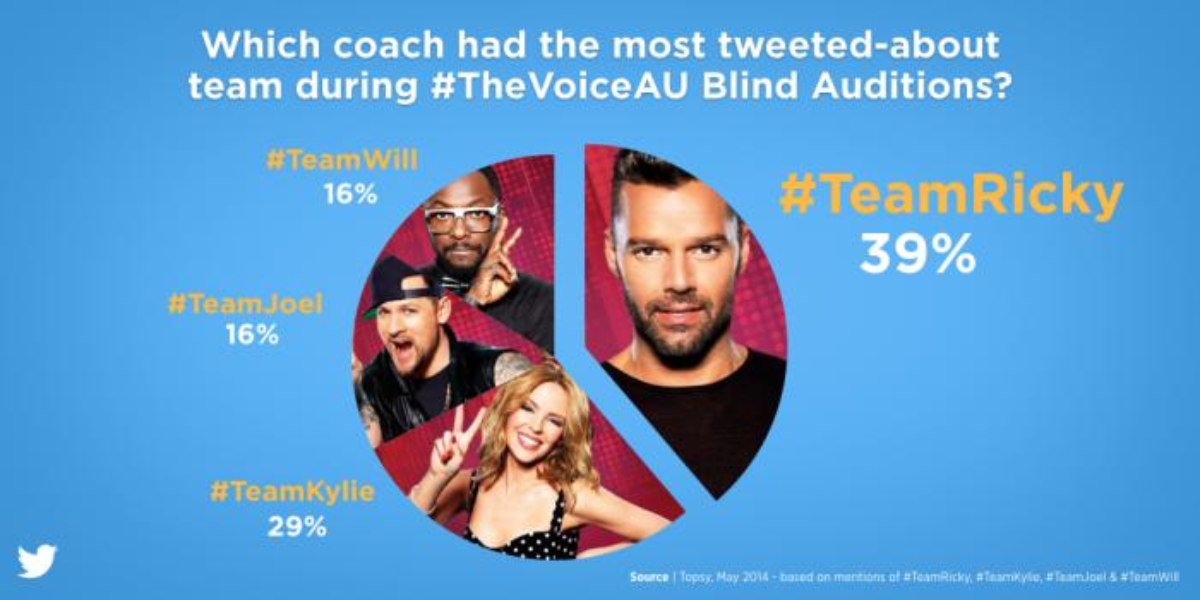