By
Sunday, 15 May 2016
Link copied successfully

The highs and lows, the wows and LOLs - Twitter came alive tonight for the final of the #Eurovision song contest, generating more than 7 million Tweets over the course of evening.

In a surprise victory, Ukraine were crowned the winners of the competition as they knocked leaders Australia off the top spot in a last-minute nail-biter.

The moment when they were declared winners saw 72,915 Tweets per minute, making it the most Tweeted-about moment of the night and breaking the record of 48,461 previously held by Georgia in 2015. 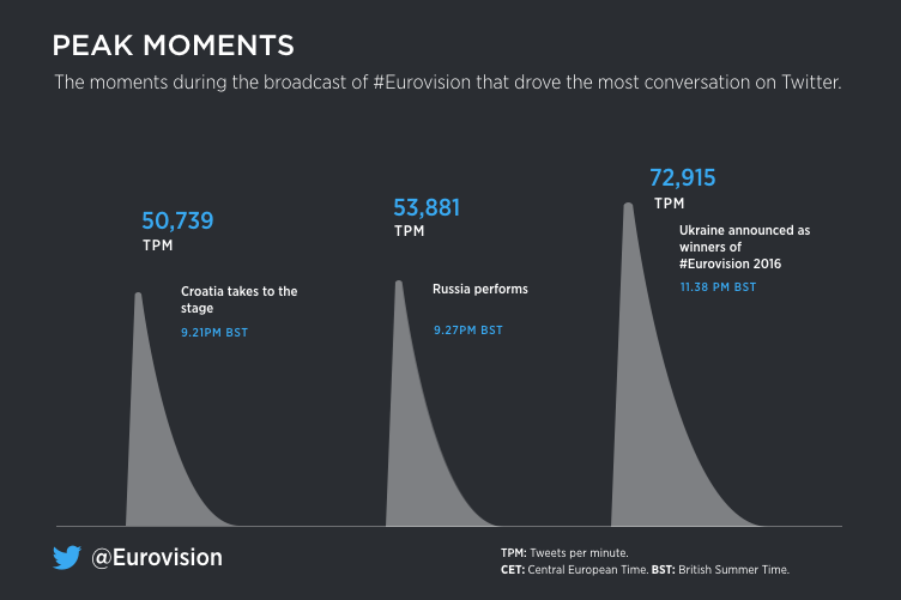 The most retweeted Tweet of the evening came from British vlogger Dan Howell (@DanIsNotOnFire), scoring more than 13,000 Retweets for his description of the spectacle:

Fan Lu (@puppyheda) scored more than 8,000 Retweets for her take on the show:

Justin Timberlake’s (@jtimberlake) appearance at the show attracted 32,000 Tweets per minute, and this message to his fellow performers was Retweeted more than 6,000 times:

Each act performing in the contest had their own hashtag - the most popular over the course of the evening were as follows:

Victory for 2016, though, belonged to @Jamala and the Ukraine, a country who had not topped the table since 2004. Relive the moment she discovered she had won with this clip:

Note: An earlier version of this blog included a lower number of Tweets per minute recorded for Ukraine’s victory, and a sightly different ranking of country hashtags. This blog has now been updated with the latest up-to-date data, covering the period three hours prior to and 30 minutes after the show’s broadcast.