Some of Twitter’s best features are emergent—people inventing simple but creative ways to share, discover, and communicate. One such convention is retweeting. When you want to call more attention to a particular tweet, you copy/paste it as your own, reference the original author with an @mention, and finally, indicate that it’s a retweet. The process works although it’s a bit cumbersome and not everyone knows about it.

Retweeting is a great example of Twitter teaching us what it wants to be. The open exchange of information can have a positive global impact and the more efficient dissemination of information across the entire Twitter ecosystem is something we very much want to support. That’s why we’re planning to formalize retweeting by officially adding it to our platform and Twitter.com.

It’s Not Ready Just Yet

Phase one of project retweet is to show the developer community how it will work from an API perspective as well as a user perspective. We’re still working out the final details, but this sketch gives you the basic idea. Let’s say you follow @jessverr, @biz (that’s me), and @gregpass but you don’t follow @ev. However, I do follow @ev and the birth of his baby boy was so momentous that I retweeted it to all my followers. 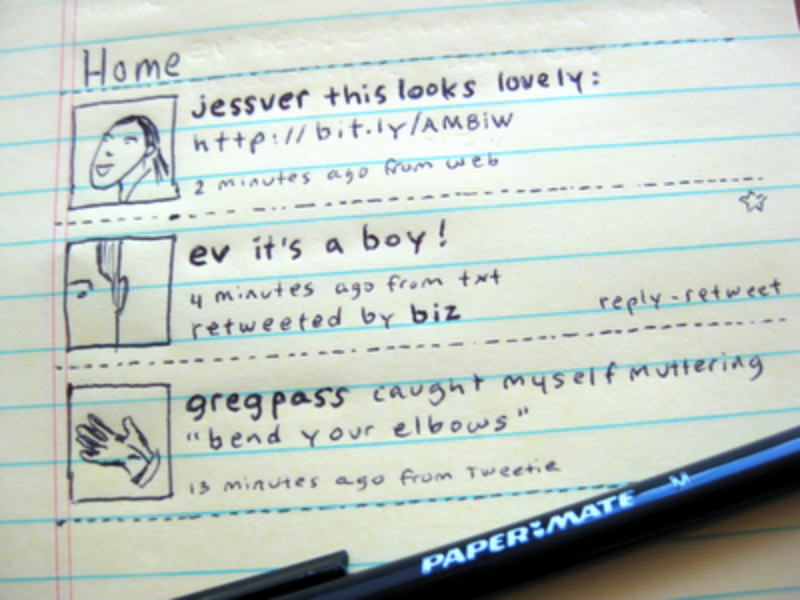 Imagine that my simple sketch is your Twitter timeline. You’d see @ev’s tweet even though you don’t follow him because you follow me and I really wanted you to have the information that I have. (The star, reply, and retweet options only show up when you hover over a row on Twitter.com which is why you don’t see them all the time.) Also, if you find my retweets annoying, then you’ll be able to turn them off.

When Will It Launch?

We are still sketching out exactly how this feature and its API counterpart works. Sharing our thoughts before launching means developers will have the opportunity to prepare their applications. In a few weeks or so we’ll launch the feature on our web site and because app developers had a chance to prepare, it should become available across most of the Twitter ecosystem about the same time. This way, we can all enjoy retweeting—however we choose to access Twitter.

The first launch of this feature will probably be a limited subset of folks for a short period of time so we can get an idea of how it works from a system perspective. After we kick the tires a bit, we’ll do a full launch to everyone. As you can see, there are still some details to be worked out but congrats to @zhanna and her team for the awesome work done so far—it’s looking really good and we can’t wait to start using the feature!