The first World Cup took place in 1930 and it has since grown to become an epic global event celebrating diversity and inspiring us to overcome adversity. More importantly, nations and people around the world have the opportunity to connect around something profoundly simple: play! The mission driving FIFA, the governing body behind the World Cup, is to “Develop the game, touch the world, and build a better future.” Good stuff.

The Republic of South Africa will host representatives from thirty two nations as they compete for the ultimate international championship. This will be the most widely-viewed sporting event in the world. Twitter’s rapid international growth means we are part of this global phenomenon as people everywhere seek to discover what’s happening with their favorite team, their favorite players, and breaking news related to this worldwide event.

Using live widgets, real-time search, and Top Tweets (updates that are currently catching the attention of many Twitter users) we’ve put together a special site to capture the spirit of the World Cup and it’s already pulsing with activity. Fans have a unique opportunity to connect with players, teams, and brands using Twitter to join the matches in a new way. We also are providing a list of suggested accounts to follow during the tournament and a World Cup theme for your profile page. We’ll leave it up to you to learn how to do the neat little trick we’re calling hashflags. 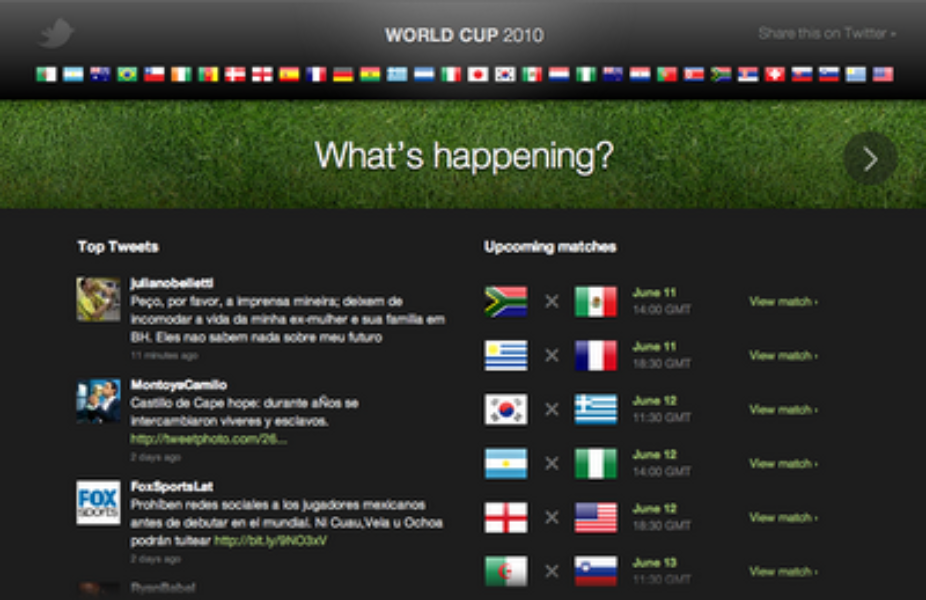