Halfway through 2011, users on Twitter are now sending 200 million Tweets per day. For context on the speed of Twitter’s growth, in January of 2009, users sent two million Tweets a day, and one year ago they posted 65 million a day.

For perspective, every day, the world writes the equivalent of a 10 million-page book in Tweets or 8,163 copies of Leo Tolstoy’s War and Peace. Reading this much text would take more than 31 years and stacking this many copies of War and Peace would reach the height of about 1,470 feet, nearly the ground-to-roof height of Taiwan’s Taipei 101, the second tallest building in the world. 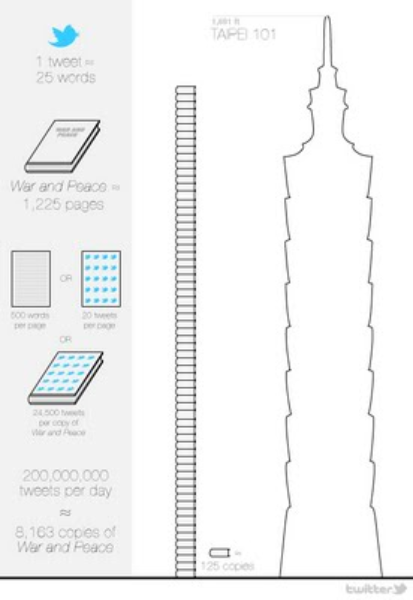 A billion Tweets are sent every five days. What’s in them? Everything about every topic imaginable – whether it’s a unique bird’s-eye view of the Shuttle launch as seen from an airplane window or cheers of support for soccer teams in this year’s Champions League tournament. Using Twitter helped a homeless man reunite with his daughter, sent two Cincinnati Reds fans to spring training on a player’s dime, and even helped residents of a small city in Korea find fresh water after its supply was cut off.

And, here are the top Trending Topics for the first half of 2011, divided into the two most popular categories: