Today we’re announcing a product that is a major step toward making Twitter more easily accessible by people around the world - the Twitter Translation Center. The Translation Center allows us to crowdsource translations from our passionate users in order to more quickly launch Twitter in additional languages.

Translators will be translating the product itself, not the Tweets. If you go to the settings page on Twitter.com and change your language, you’ll see what we mean.

We currently offer Twitter in English, French, German, Italian, Japanese, Korean, and Spanish. These languages are all included in the Translation Center so translators can continue to help us with updates. We’ve also added Indonesian, Russian and Turkish to the Translation Center, as Twitter will be translated to those languages next. We plan to introduce more languages throughout the year, such as Portuguese.

Crowdsourcing translations isn’t new for us. Since October, 2009, we’ve counted on Twitter users to volunteer as translators and help us localize Twitter. For this launch, we created a completely new system, based on feedback from translators, to improve the translation experience. 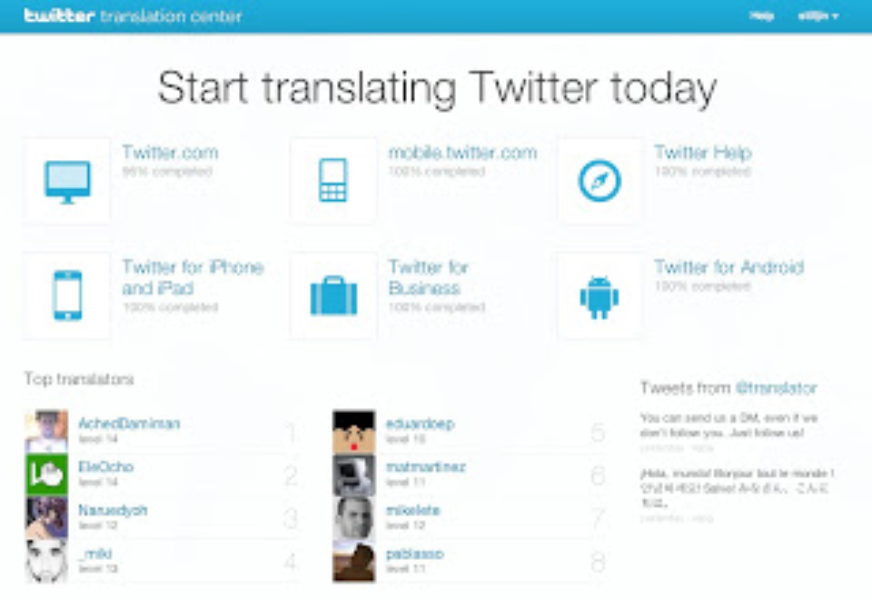 How does it work?
The new Translation Center allows any Twitter user to sign up, choose a language and begin translating immediately. Translators can now help localize twitter.com, mobile.twitter.com, Twitter for iPhone and iPad, Twitter for Android, Twitter Help and the Twitter Business Center. We also improved the Center’s search functionality, added phrase tagging, created special translator profiles, enabled commenting on phrases and much more.

At this time, we have opened up the Translation Center to users who speak French, Indonesian, Italian, German, Japanese, Korean, Russian, Spanish, and Turkish. If you speak any of these languages, you can start helping us translate! Head over to twitter.com/translate and follow @translator for the latest updates.