The NBA season starts today on the court and on Twitter when the @WashWizards take on the @Cavs. There are currently around 400 players on Twitter - representing nearly 90% of the NBA, the highest percentage among all sports leagues.

To keep up with your favorite team and players, check out our new NBA Get Started page. Below each team name you’ll find a link to their list of players, letting you follow them all with the click of a button. 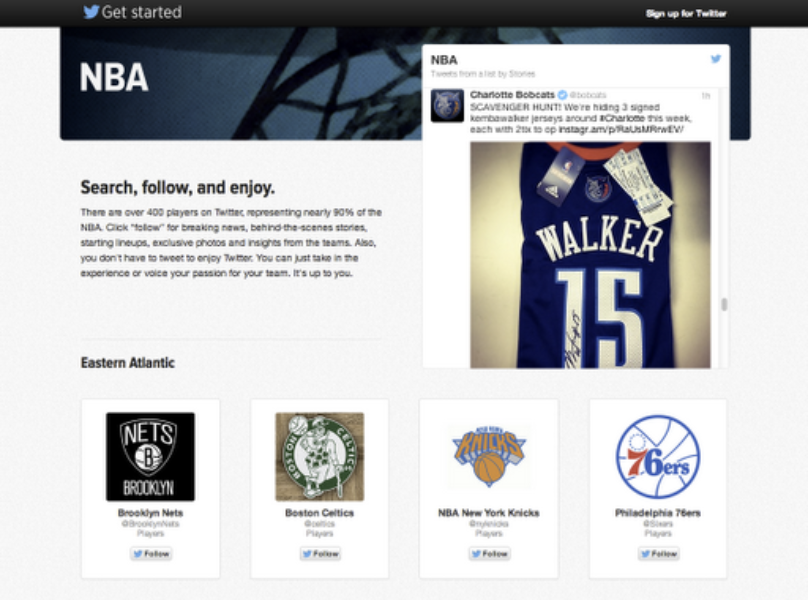 Among those 400 players, you’ll find the sport’s biggest names as well as its rising stars - and they all have incredible perspectives to share. During the Olympics, the NBA’s top players competed in London and took their fans along for the journey to gold:

Fans also experienced the insider moments that usually are confined to the locker room. After one of the offseason’s biggest moves - the weekend’s late-night trade of James Harden (@JHarden13) to the @HoustonRockets - players took to Twitter to express their surprise. One of the most powerful Tweets only took 3 characters, coming from former teammate Kevin Durant (@KDTrey5):

Other reactions varied from across the league. You can watch the players go 1-on-1 on the court, and on Twitter:

Even NBA Commissioner David Stern has taken note of the power of Twitter to bring fans closer to their favorite teams and players day in and day out. In his historic year, @KingJames took his Twitter followers on the road during the season, to the championships, and to London:

With all the teams and 90% of the players - including the NBA’s biggest names - on Twitter, you’ll have an unprecedented view of the court all season long. Don’t miss out.