Tonight Vice President Joe Biden (@JoeBiden) and Rep. Paul Ryan (@PaulRyanVP) squared off for the quadrennial Vice Presidential debate. Citizens tuned in to watch or listen and tweet, sharing their opinions on the evening’s exchanges. In total, 4 million Tweets were sent concerning tonight’s debate, 3.5 million of which occurred during the 92 minutes of live action.

Of those 4 million Tweets, 26% were about foreign policy; 21% discussed the economy; and 16% were regarding taxes. However, several of the moments that inspired the most Tweets per minute were quips the candidates made. Tonight’s top Tweets per minute (TPM) peaks were:

The full timeline of conversation and notable moments can be seen below (click to enlarge): 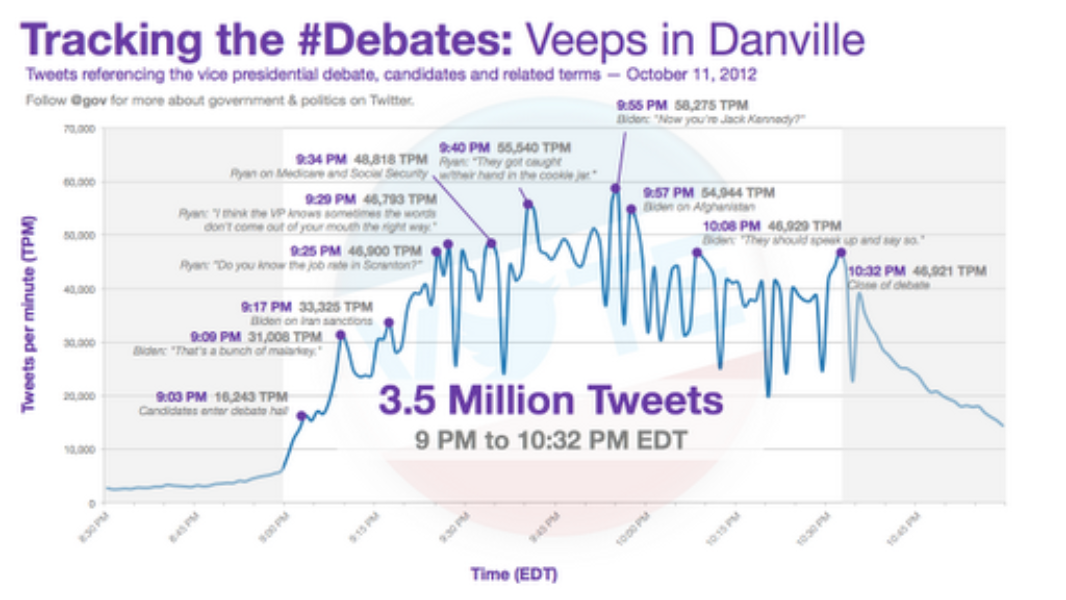 While the unexpected star of the Presidential debate turned out to be Big Bird, tonight’s buzzword was malarkey, which generated more than 30,000 Tweets. Another notable figure of the evening: moderator Martha Raddatz (@MarthaRaddatz), Senior Foreign Affairs Correspondent for ABC. Viewers expressed their delight in her moderating skills:

I vote for Martha Raddatz to moderate all the debates. #vpdebate
— Roger Ebert ( @ebertchicago) October 12, 2012

Political insiders and pundits closely followed the discussion and shared their views:

Tough sell for Biden to defend Afghanistan policy when he argued so long and hard against it. #vpdebate
— Ron Elving ( @relving) October 12, 2012

Ryan hits Obama for doing the View instead of meeting with Bibi
— Zeke Miller ( @ZekeJMiller) October 12, 2012

Joe Biden won - not because he was aggressive which he was - but because he didn’t let Ryan get away with making stuff up. #VPDebate
— Hilary Rosen ( @hilaryr) October 12, 2012

Where were the Presidential candidates while their running mates debated in Danville? Twitter was full of pictures showing how the campaigns and tonight’s VIPs experienced the debate:

With my son and his friend on stage after the debate! twitter.com/MarthaRaddatz/…
— Martha Raddatz ( @MarthaRaddatz) October 12, 2012

We’ll be back again in just five days for next Tuesday’s town hall debate between the @BarackObama and @MittRomney.