For baseball fans, October is synonymous with the playoffs. The postseason berths and brackets went down to the wire, finally being cemented after the last day of the regular season yesterday. The #postseason starts tonight, with Division Series slots on the line in a single winner-take-all game. The @Rangers and @Orioles face off in the AL Wild Card playoff, and the @Braves take on the reigning champions the @Cardinals in the NL matchup.

Throughout the regular season, the @Rangers fans had a larger cheering section on Twitter than the @Orioles (based on number of mentions), while the @Braves fans were louder than the @Cardinals fans. Who will be cheering the loudest tonight?

And for the divisional series games that begin tomorrow, here’s the roar from the tweet-seats: 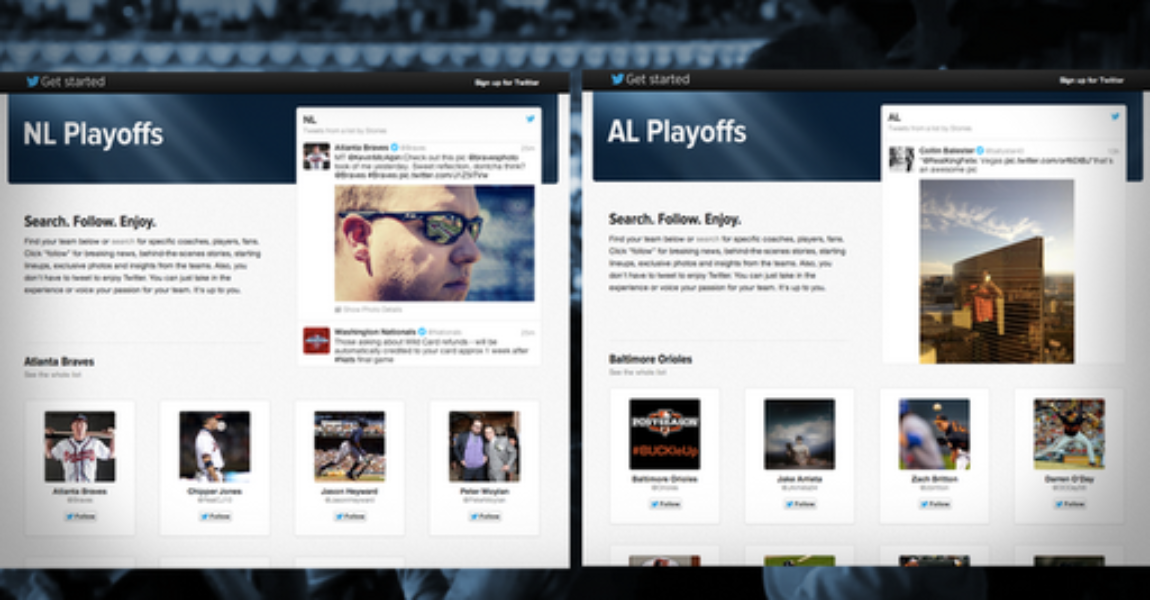 As we head into the playoffs, following the action on Twitter is like having access to the dugout. You can get a first look at lineups, hear commentary from managers and front office, get insights and strategy from sports reporters, sift through countless statistics, talk to your favorite players, and of course, cheer loudly for your team.

The @Braves, facing off tonight in the Wild Card matchup, let fans near and far get a glimpse of soon-retiring Chipper Jones (@RealCJ10) in batting practice:

The beat reporter for the @SFGiants lets fans in on what the team’s pitching lineup may look like through the postseason:

The staff of the @Rangers express their frustration after losing the division title, and rally up fan support for tonight’s Wild Card game:

Today is a huge disappointment for the Rangers community. But Friday we need the fans support as we look to win the Wild Card game. #Believe
— Texas Rangers ( @Rangers) October 3, 2012

The wife of @Athletics pitcher Brandon McCarthy (@BMcCarthy32) shares a photo of the team’s on-field celebration after winning their division:

The boys came back out… And the fans were still there twitter.com/Mrs_McCarthy32…
— Amanda McCarthy ( @Mrs_McCarthy32) October 4, 2012

The first winner of the Triple Crown since 1967, @Tigers 3B Miguel Cabrera tweets his gratitude to his Spanish-speaking fans:

Drew Storen & Tyler Clippard, close friends battling for the closer role on the @Nationals, are also battling over who pays for dinner - and fans get to vote for who picks up the tab:

True debate of the night: who pays the dinner bill between me and Clip. You guys decide. Tweet #VoteDrew or #VoteClip. Most votes wins.
— Drew Storen ( @DrewStoren) October 4, 2012

After winning their division in the last game of the season, the @Yankees show what it really looks like in the clubhouse celebration:

Ichiro is headed to the #postseason for the first time since 2001. So @ joba_62 congratulated him: twitter.com/Yankees/status…
— New York Yankees ( @Yankees) October 4, 2012