As the presidential candidates met at Hofstra University tonight to answer questions from a group of self-declared undecided voters, viewers around the country came to Twitter to participate in the debate exchanges and offer their own commentary. Throughout tonight’s 90-minute #debate, 7.2 million Tweets were sent.

The specific moments that generated the highest amounts of conversation were: 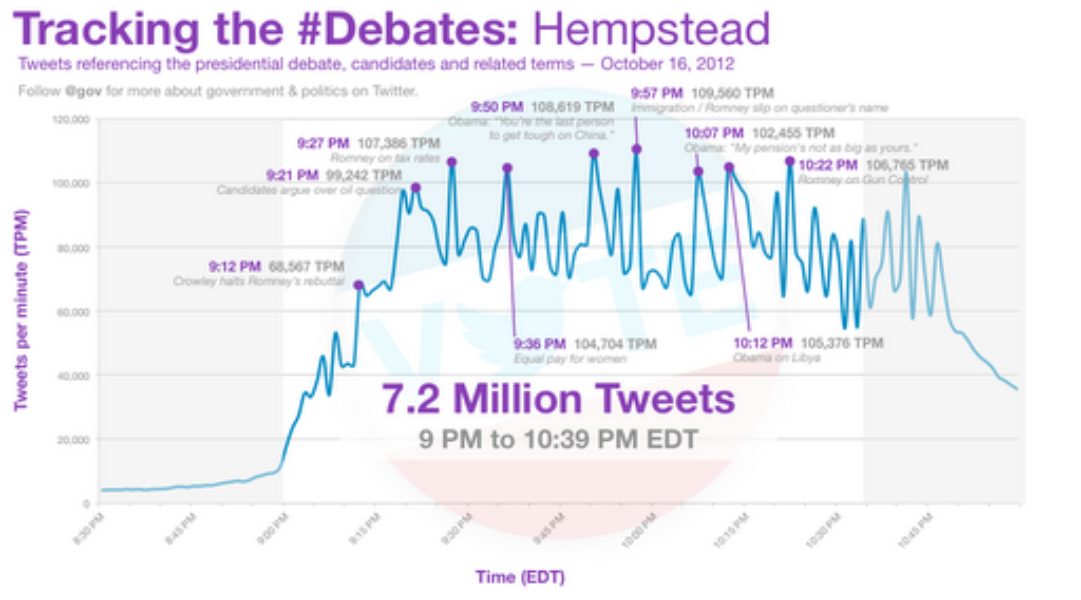 We also analyzed the volume of conversation around some of the campaign’s biggest issues. With 28% of Tweets sent, the economy was the most-discussed topic this evening. The subject of taxes racked up 17% of Tweets; 16% focused on foreign policy, 13% on energy and the environment, and 8% on immigration.

We saw several surprising trends and buzzwords emerge too. The terms “binder” and “pension” rose to Twitter infamy tonight, and we suspect “Jeremy” (a young questioner, soon to graduate from college) will be popular in class tomorrow. As we’ve come to expect, such trending topics inspire parody accounts almost instantly:

As we’ve seen in the previous two debates, the performance of the moderator was another popular topic. CNN’s Candy Crowley (@CrowleyCNN) generated her share of commentary:

Since both candidates are trying to convince voters that they respect women, they might start by respecting Candy Crowley
— Nicholas Kristof ( @NickKristof) October 17, 2012

The debate ended with emotional (albeit slightly biased!) responses from the people closest to the candidates: their families.

I’m so proud of my husband tonight. Let’s have his back as he has had ours. –mo #TeamBarack
— Michelle Obama ( @MichelleObama) October 17, 2012

In just six days, we’ll be in Boca Raton for the final debate of this campaign. See you then.