On America’s Got Talent (@NBCAGT) it’s usually up to Howie Mandel (@howiemandel), Heidi Klum (@heidiklum), Mel B (@OfficialMelB) and Howard Stern (@HowardStern) to determine which contestants stay or go.

Once the live shows begin, the viewers also have a say in who makes it to next week’s show. This week, AGT became the first competition reality show to invite viewers to vote using Tweets, in addition to their existing methods of voting, for their favorite acts:

Get ready, Twitter! We’re counting on YOUR VOTES this season! Watch #AGT live tomorrow at 9/8c to find out how you can vote on Twitter!

Throughout the competition on Tuesday, viewers were encouraged to tweet their votes to determine which acts would make it through to next week’s show. On-air reminders ran after each performance ended, and Nick Cannon (@NickCannon) bolstered that message by asking viewers to take out their phones to choose their favorite act. 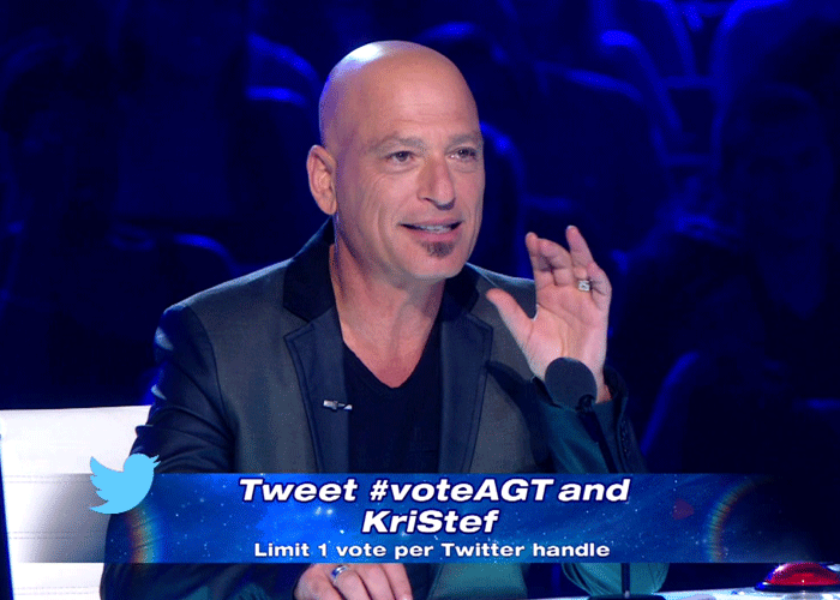 Voting was as simple as using the hashtag #voteAGT followed by the act’s name:

During the show, Cannon exhorted the viewers:

I’m going to be tweeting right all through the show. You know we wanna hear what you guys have to say on Twitter.

Turns out the viewers had lots to say during the first live show of the season. According to Social Guide, which analyzes conversation on Twitter in real time, America’s Got Talent was the most social show on broadcast TV the night of July 23, and enjoyed an 8X increase in Tweets compared to the prior week. In all, there were more than 117,000 Tweets that night as fans had a say on Twitter about which act they felt was truly talented.