The @Wimbledon Championships got under way at The All England Club on Monday, in what promises to be the most social #Wimbledon experience ever.

Defending champion @andy_murray started the defense of his men’s singles title with a straight-sets victory on the famous Centre Court grass.

And Britain’s first men’s champion for 77 years gave his fans an exclusive treat via Twitter.

Just 40 minutes before walking on court, The Scot retweeted an invitation from Wimbledon to send a Tweet to @Wimbledon with hashtag #WelcomeBackAndy in exchange for a personalised digital souvenir.

More than 3,000 fans got their souvenirs and the hashtag trended in the UK, but there is still time for you to get one of five Digigraph images and messages from @andy_murray. So get tweeting @Wimbledon, #WelcomeBackAndy.

Murray’s match was only the curtain-raiser for a fortnight of the finest tennis and most vibrant tennis discussion, as fans, players, commentators and celebrities gather to watch the action unfold on Twitter.

Tennis fans can also get involved via: 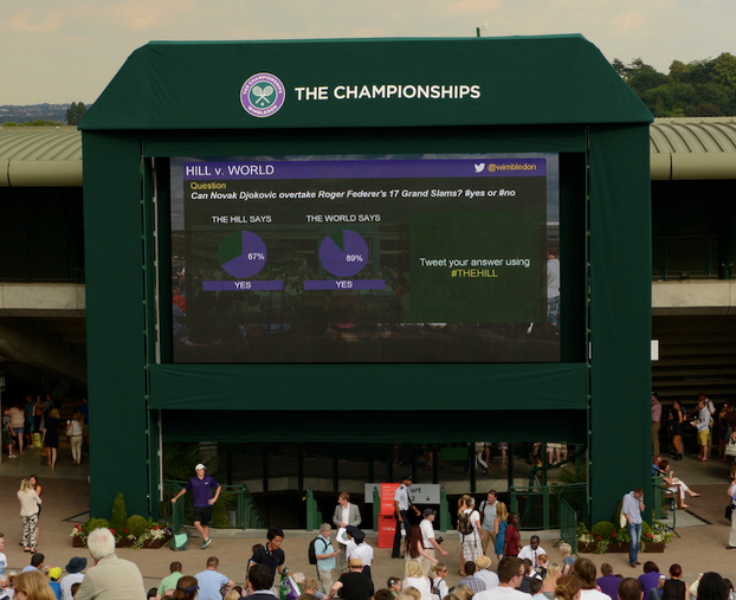 Image used with permission of @Wimbledon.

Monday’s winners declared themselves to be at Wimbledon for the strawberries and cream.

Whoever you are supporting, and whether or not you visit the hallowed turf, Twitter will keep you informed, with breaking news and player analysis and anecdotes:

Of the 85% of seeded players on Twitter in the main draw, the top 10 most-followed players are split equally between men and women. Heavyweights @RafaelNadal and @serenawilliams occupy the top spots, with a combined following of more than 10 million.

And the most-followed U.S. hopefuls include:

And share seven-time champion @rogerfederer’s enduring excitement for the event:

When big events happen in the world, they happen on Twitter, and it won’t just be the players joining the conversation. Expect commentators, pundits, former players and other notables to provide real-time updates. A selection of accounts you can follow include:

Whether @andy_murray can retain his title after a 77-year wait remains to be seen.

What is certain, though, is that #Wimbledon 2014 will be the most social tournament ever, with Twitter amplifying the roar of the crowd on every challenge, ace, double-fault, passing winner and overhead smash.