Throughout the World Cup, Twitter data has helped to tell the story of all the action unfolding on the pitch. We typically look at the moments when the crowd is roaring the loudest, which we measure in Tweets per minute (TPM) containing at least one World Cup-specific keyword. However, sometimes a silence can tell just as rich a story.

For example, we noticed an interesting phenomenon during the Brazil vs. Chile match on June 28, which went into a shootout to determine which team advances to the quarterfinals and which team’s World Cup journey comes to a close. The last penalty kick, which sent @CBF_futebol through to the quarterfinals, generated the highest single-minute activity we’ve seen thus far in the World Cup, with 388,985 TPM.

But what led to that rush of excitement? To get a deeper understanding, we looked at Tweets per second (TPS), which measures systemwide Twitter usage (not tied to specific keywords, as TPM is). What we found is that just as each player took his shot, Twitter activity dropped markedly.

During the #WorldCup, sometimes silence tells the story.

Here’s a look at the TPS activity during the #BRA vs. #CHI shootout, with a closeup of the first shot by #BRA’s David Luiz (@DavidLuiz_4). You can then see the same pattern repeat throughout the entire shootout, and then the sustained activity on Twitter once #BRA sealed their victory after the final shootout attempt was missed by #CHI’s Gonzalo Jara. 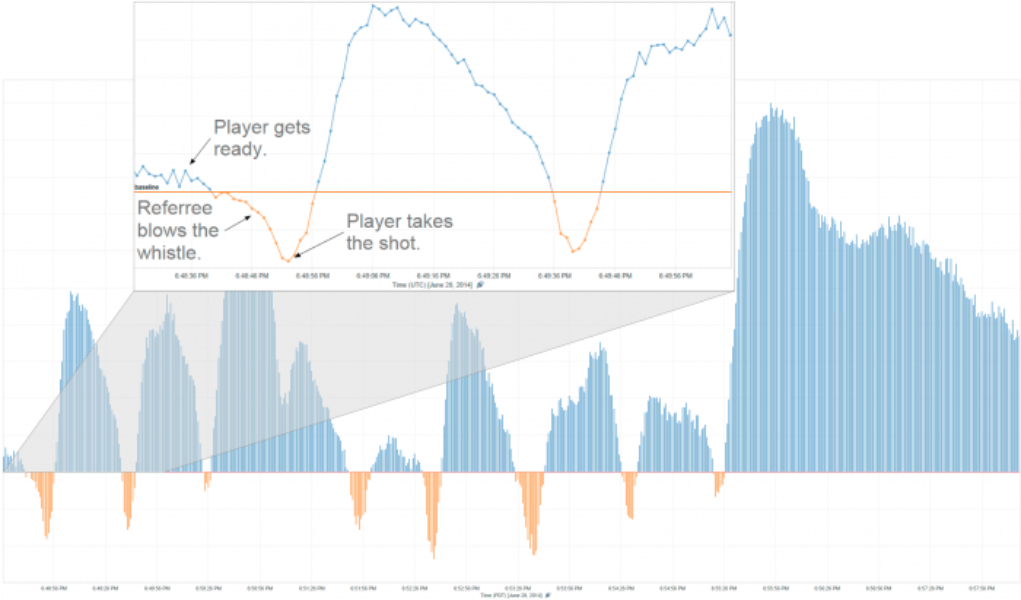 This pattern has repeated itself for each of the shootouts we’ve seen in the knockout round. If you’ve been to a World Cup viewing party, you’ve probably noticed the same phenomenon: the bar buzzes with excitement as a player gets ready for his shot, and bursts into an emotional reaction based on its outcome — but went silent in between, for that moment as his laces met the ball and it curled towards the net.

On Twitter, you can see the world gradually draw its attention more to the screen as the shot nears. When the referee blows the whistle, Twitter goes nearly silent as all eyes are glued on the crucial kick. The shot is taken, and Twitter — as with fans worldwide — erupts into applause, disappointment and elation.