Soccer (or football) fans around the world joined the real-time #FIFAWWC global viewing party on Twitter throughout the thrilling tournament to discuss all of the action on and off the pitch. Now that #USA has officially taken home the gold after Sunday’s final, we took a look at how every team and player performed on Twitter.

Here are the @TwitterData insights recapping the series through Tweets.

Tweets about #FIFAWWC were viewed 9 billion times.
Whether Tweeting about an incredible @hopesolo save, watching replays of one of Celia Sasic’s six goals, reading analysis from sideline reporters, or rooting on your home team with lots of Twitter emoji, #FIFAWWC fans turned to Twitter to be a part of all the action. In total, this has lead to 9 billion impressions of Tweets about the Women’s World Cup (6/6-7/5/15). 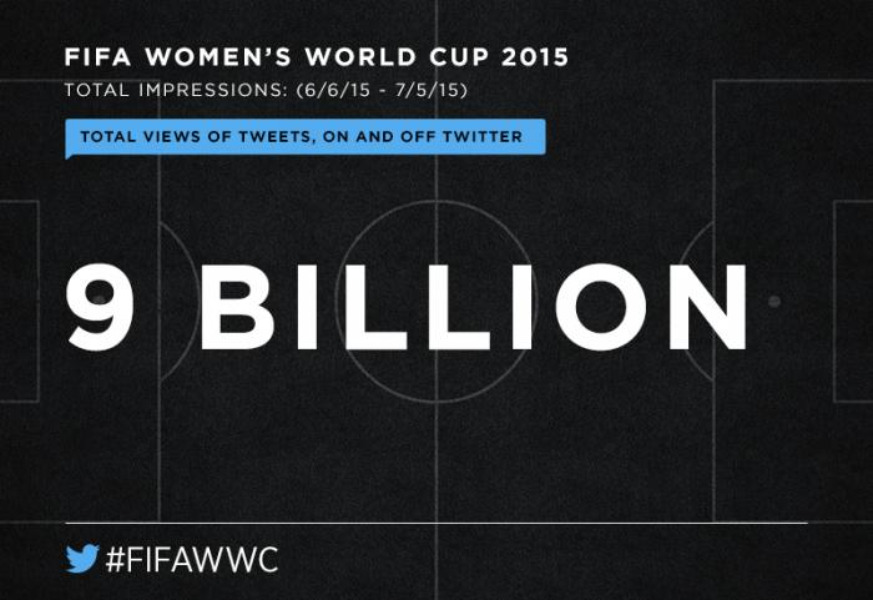 Top match: #USA vs. #JPN final
Not surprisingly, the most important match on the field was also the biggest match on Twitter. With the title on the line and a remarkable 4-0 start by #USA, the final game saw the most Twitter conversation of any match.

Several other #USA matches along the road to the championship came in atop the Twitter leaderboard as fans Tweeted throughout all of their commanding performances. The nail-biter matches between #JPN vs. #ENG (won in the final minute of stoppage on an own-goal) and #GER vs. #FRA (won in penalties) also generated significant levels of Twitter buzz.

Based on the number of Tweets posted during the match, here were the top matches of the series: 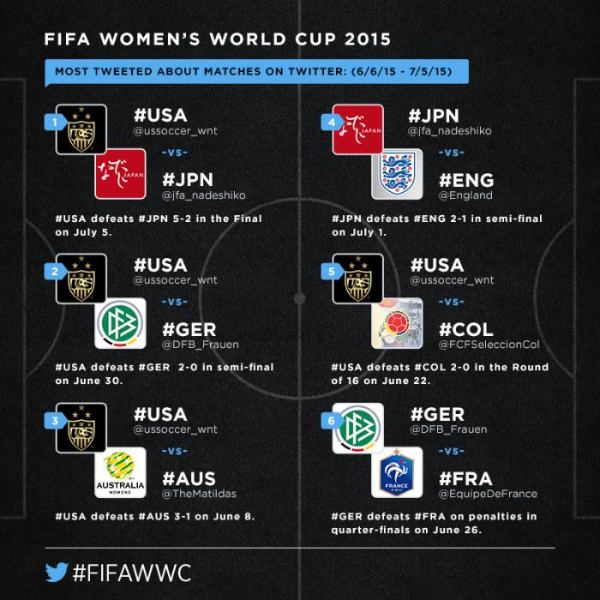 Top Player: #USA midfielder @CarliLloyd
With a historic hat trick during the first 16 minutes of the final match, which culminated her Golden Ball-worthy performance, #USA’s Carli Lloyd (@CarliLloyd) was the most-discussed player throughout the entire World Cup.

Her teammates also had incredible showings on the field, which was accordingly reflected in their performance on Twitter. In fact, the top six tournament players all hail from the champion #USA team. Here’s how they stack up: 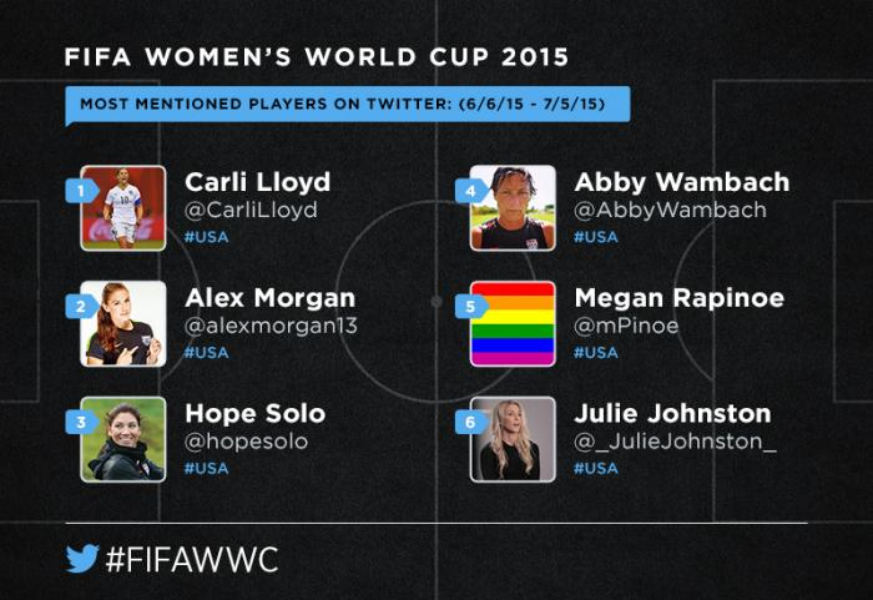 Top moment: End of final match as #USA claims victory
The roar of the crowd reverberated through BC Place and across Twitter as #USA officially won the 2015 FIFA Women’s World Cup. Tweets per minute spiked at their highest point of the entire season as the whistle blew and #USA claimed the title.

Central to #USA’s success throughout the entire tournament was Golden Ball-winning midfielder @CarliLloyd, whose goals lead to four of the top six spikes in Twitter activity during the #FIFAWWC. Here are the six most exciting moments of the Women’s World Cup, as measured by Tweets per minute (TPM): 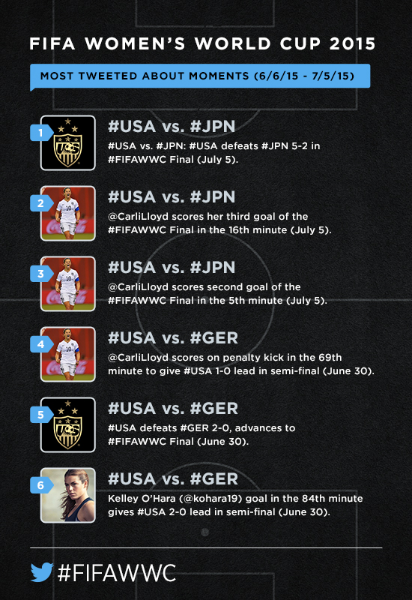 Top Teams: #USA and #JPN
On the field, #USA claimed the gold medal and #JPN the silver, and they ranked in the same way on Twitter (based on Twitter mentions throughout the series). Meanwhile, #ENG bested #GER on the pitch for the third-place spot – but #GER eked out a position above #ENG on Twitter. The fans of #AUS and #FRA also made their voices heard, also earning a place on the Twitter leaderboard.

Based on Tweets mentioning the team or its players, here are the six most-discussed teams during the tournament: 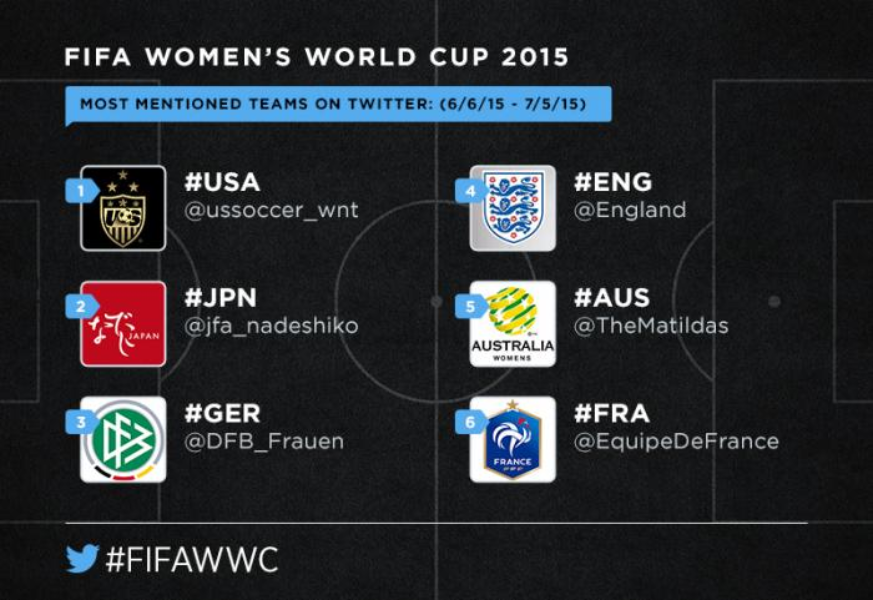 And in case you missed it, check out our recap on #USA defeating #JPN in Sunday’s final.

Twitter TV activity and reach data for the U.S. market will be available from Nielsen here.