If you think you know where @PremierLeague fans are located, you may be surprised by our new Premier League Twitter fan map, which shows a detailed global breakdown of the followers of all 20 clubs.

Explore this new interactive map, which was built by our data visualisation scientist Krist Wongsuphasawat, to discover which teams dominate each country, and where loyalties lie at a district-level in the UK.

The map was created by looking at the official Twitter accounts for each team, using their followers as an indicator of allegiance (as opposed to, say, instances in which people mention a team while watching an interesting matchup or talking about a team’s rival).

The primary view shows at a glance which teams dominate each country around the world, but there are interesting ways within this to explore the map in greater depth:

Because each country divides municipalities differently (counties, states, territories, etc.), we employed a technique called hexagonal binning, which divides the map into equally-sized hexagons, like a honeycomb, so you can see fandom by region instead of treating each country as one big region.

Half of the fun is in exploring the map for yourself, but here are a few UK and global trends we found to get you started:

Old order remains: You only have to glance at the UK map to see that Liverpool (@LFC, in green) dominates. There are pockets of red (Manchester United – @ManUtd) and yellow (Arsenal – @Arsenal), but green is most prevalent, spreading from Merseyside north to Scotland, south towards London and into Wales and Ireland. @LFC, @ManUtd and @Arsenal have 51 top-division titles between them, and that historic success shines through. 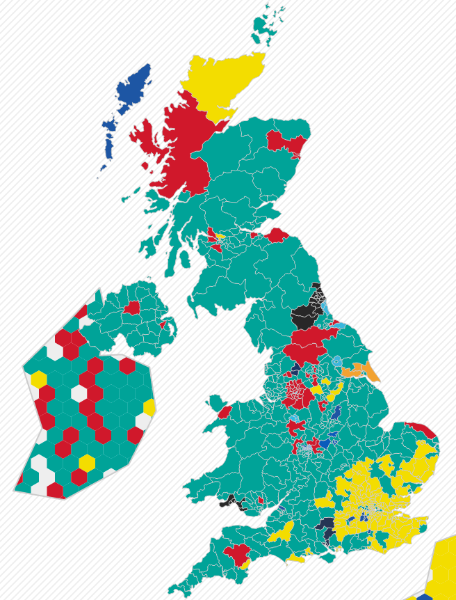 Gunners take London: There are six Premier League teams in London, but one stands apart from the rest in terms of Twitter followers: @Arsenal. Not only do the Gunners have more followers in their own locale of Highbury and Islington, but they also edge out arch-rivals Tottenham (@SpursOfficial) and @ChelseaFC in their backyards. Crystal Palace (@CPFC) also see their home turned Arsenal yellow, while West Ham (@WHUFC_official) and Queens Park Rangers (@QPRFC) are shaded out by Liverpool green.

Local luminaries: Outside of London, local teams are able to buck the trend of @LFC, @ManUtd and @Arsenal dominance. In pockets of varying size around their stadiums, the following clubs retain ownership of their area:

Manchester City (@MCFC), meanwhile, win one valuable territory in the centre of Manchester, amid a sea of @ManUtd red.

Derby day: Football centres around traditional rivalries and four of the biggest in the Premier League end with home wins. North London is very much red with @Arsenal getting the better of @SpursOfficial; The Merseyside derby sees @LFC overcome @Everton on this occasion; The battle in Manchester sees the red of @ManUtd sink the blue of @MCFC; In the Midlands it is @AVFCofficial that take ownership of Birmingham at the expense of West Brom (@wbafcofficial); And it’s @NUFC that claim the northeast with more territory than bitter rivals @SunderlandAFC.

The European divide: Fascinatingly, it’s a tale of two London clubs in Europe, with @Arsenal generally owning the Northern European countries, while @ChelseaFC presiding in the south. Several of these teams’ biggest stars, past and present, hail from countries that show strong support for their team:

The Asian split: The outlook is different in Asia, where @ManUtd takes a strong grip on India and Pakistan, while battling with @ChelseaFC for control of football-mad Malaysia and Indonesia. @LFC fare slightly less well in those countries but bounce back with a big lead in Thailand. Meanwhile, @Arsenal taste success in Japan, South Korea and The Philippines. 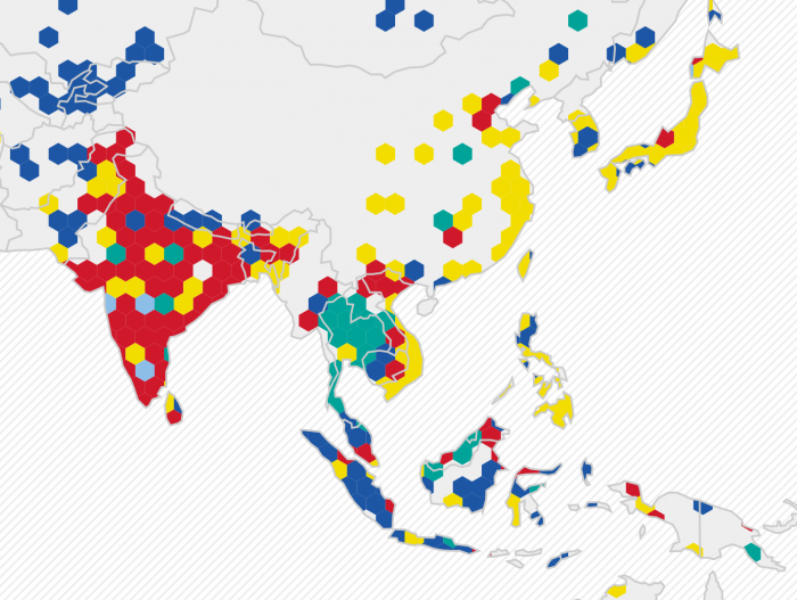 American blues: The North America picture is in a way reflective of the Premier League era as a whole. The top four, @Arsenal, @ChelseaFC, @ManUtd and @LFC, so frequently occupied these positions in varying orders throughout the Premier League years that their dominance comes as no surprise. @Everton, the team of #WorldCup2014 US star Tim Howard (@TimHowardGK), hits 7th place among American fans.

Meanwhile in South America it is @ChelseaFC asserting their dominance from Mexico down through South America, with a few notable exceptions:

Player power: In many countries, Premier League allegiance appears to be related to, at least in part, the presence of local players. That’s evident for Suarez and Sanchez in Uruguay and Chile, and also for Edin Dzeko (@EdDzeko) in Bosnia and Herzegovina, where Manchester City takes a rare first place.

Other patterns of international players and home country fandom for their team include:

Off the pitch: What other factors, beyond the more obvious ones such as player affiliation and geographical impact, could influence a team’s fan base? Here are a few other interesting connections:

As the Premier League heads into the business end of the season, fans will continue to come to Twitter to support their club over the line. Each view of this interactive map can be Tweeted or embedded by clicking either the ‘Tweet this view’ or ‘Embed this view’ buttons at the top of the screen.