I’m one of the leads on #TwitterParents, a new employee resource group. My partner and I have two six-year-old twin boys and there is rarely a day that goes by that they don’t astound me with something they say or do. Millions of dads share the life-changing experiences of fatherhood, large and small, on Twitter. To celebrate the dads who Tweet, we took a deeper look inside the community, and we found they are as diverse on Twitter as they are IRL.

There have been 200 million Tweets about dads and fathers in the past year, and many of those come from the 7.5 million people who identify themselves as a “Dad” or “Father” in their Twitter bios. The most Tweeted word to accompany the phrase “fatherhood is…” on Twitter is “fulfilling.” See the graphic below for more highlights: 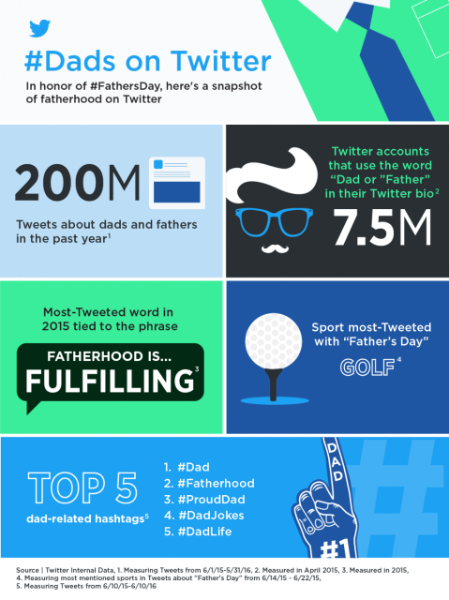 To all the dads who Tweet, as well as the moms, sons and daughters that have had a dad that has impacted our lives, let’s express our collective gratitude this weekend and say #ThankYouDad.

Finally, we will leave you with some Twitter Dads’ unique perspectives on fatherhood: