Additional steps we're taking ahead of the 2020 US Election

This blog has been updated November 2, 2020, to reflect updated information on labeling election results.

Twitter plays a critical role around the globe by empowering democratic conversation, driving civic participation, facilitating meaningful political debate, and enabling people to hold those in power accountable. But we know that this cannot be achieved unless the integrity of this critical dialogue on Twitter is protected from attempts — both foreign and domestic — to undermine it.

How our Civic Integrity Policy applies on and around Election night

We do not allow anyone to use Twitter to manipulate or interfere in elections or other civic processes, and recently expanded our civic integrity policy to address how we’ll handle misleading information surrounding these events. Under this policy, we will label Tweets that falsely claim a win for any candidate and will remove Tweets that encourage violence or call for people to interfere with election results or the smooth operation of polling places. More specifically:

Tweets with labels are already de-amplified through our own recommendation systems and these new prompts will give individuals more context on labeled Tweets so they can make more informed decisions on whether or not they want to amplify them to their followers.

In addition to these prompts, we will now add additional warnings and restrictions on Tweets with a misleading information label from US political figures (including candidates and campaign accounts), US-based accounts with more than 100,000 followers, or that obtain significant engagement. People must tap through a warning to see these Tweets, and then will only be able to Quote Tweet; likes, Retweets and replies will be turned off, and these Tweets won’t be algorithmically recommended by Twitter. We expect this will further reduce the visibility of misleading information, and will encourage people to reconsider if they want to amplify these Tweets.

This label is for illustrative purposes only.

Beginning October 20 through at least the end of Election week in the US, when we will assess their continued necessity, we will also introduce the following changes globally to Twitter:

First, we will encourage people to add their own commentary prior to amplifying content by prompting them to Quote Tweet instead of Retweet. People who go to Retweet will be brought to the Quote Tweet composer where they’ll be encouraged to comment before sending their Tweet. Though this adds some extra friction for those who simply want to Retweet, we hope it will encourage everyone to not only consider why they are amplifying a Tweet, but also increase the likelihood that people add their own thoughts, reactions and perspectives to the conversation. If people don’t add anything on the Quote Tweet composer, it will still appear as a Retweet. We will begin testing this change on Twitter.com for some people beginning today.

Second, we will prevent “liked by” and “followed by” recommendations from people you don’t follow from showing up in your timeline and won’t send notifications for these Tweets. These recommendations can be a helpful way for people to see relevant conversations from outside of their network, but we are removing them because we don’t believe the “Like” button provides sufficient, thoughtful consideration prior to amplifying Tweets to people who don’t follow the author of the Tweet, or the relevant topic that the Tweet is about. This will likely slow down how quickly Tweets from accounts and topics you don’t follow can reach you, which we believe is a worthwhile sacrifice to encourage more thoughtful and explicit amplification.

Finally, we will only surface Trends in the “For You” tab in the United States that include additional context. That means there will be a description Tweet or article that represents or summarizes why that term is trending. We’ve been adding more context to Trends during the last few months, but this change will ensure that only Trends with added context show up in the “For You” tab in the United States, which is where the vast majority of people discover what’s trending. This will help people more quickly gain an informed understanding of the high volume public conversation in the US and also help reduce the potential for misleading information to spread.

The improvements we’re announcing today are the latest in our comprehensive effort to apply the lessons of 2016, and from elections that have happened around the world since, to the 2020 US Election. This is exemplified in our efforts surrounding the last US Midterm Election through this month:

Twitter has a critical role to play in protecting the integrity of the election conversation, and we encourage candidates, campaigns, news outlets and voters to use Twitter respectfully and to recognize our collective responsibility to the electorate to guarantee a safe, fair and legitimate democratic process this November. As with any other product change, we will learn, observe, and iterate based on the impact of these changes, to inform both our strategy around future global elections and Twitter's overall product experience.

In addition to these changes, as we have throughout the election period, we will have teams around the world working to monitor the integrity of the conversation and take action when needed. We have already increased the size and capacity of our teams focused on the US Election and will have the necessary staffing to respond rapidly to issues that may arise on Twitter on Election night and in the days that follow.

For more updates as the election continues, please follow @TwitterGov.

This has been updated November 2, 2020, with updated information below on labeling election results.

Offering further details on our plans for Election results

Because this is an unusual election — restrictions in response to COVID-19 have led to historically high numbers of mail-in ballots, which may result in some state results not being resolved on election night — we are taking additional steps to provide context when results have not been officially called. We believe this is the right thing to do to protect the integrity of the conversation around the election while counting is ongoing and before results are announced by state authorities. Beginning on election night through the inauguration, we will label some Tweets that make claims about election results. We will be prioritizing the presidential election and other highly contested races where there may be significant issues with misleading information based on the below criteria.

Who is eligible for a label?

Who do we consider official sources for election results? 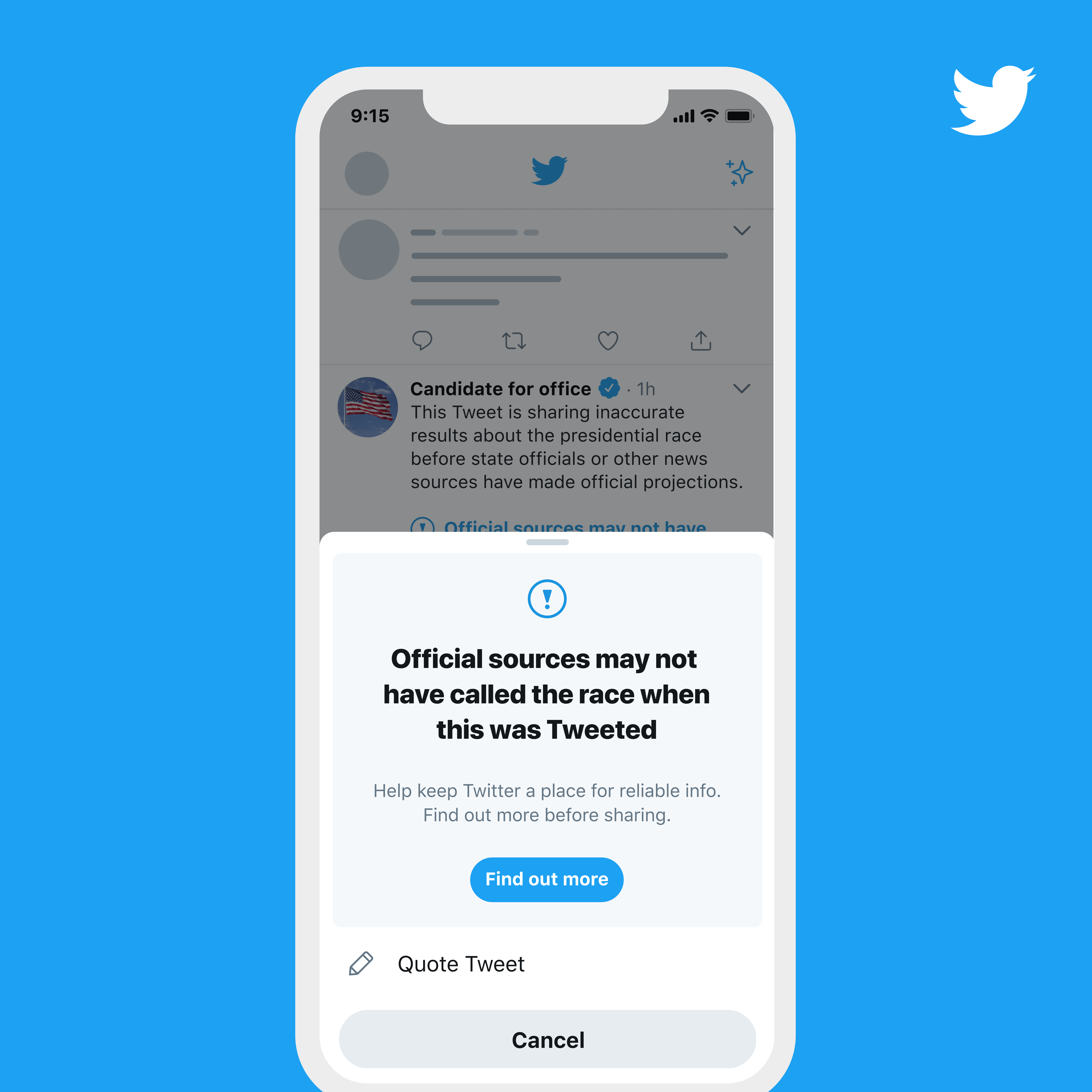