Behind the numbers: how to understand big moments on Twitter

Every two and a half days, a billion Tweets are sent. Put another way, that’s three for every man, woman and child in the United States — or five for everyone in Brazil. 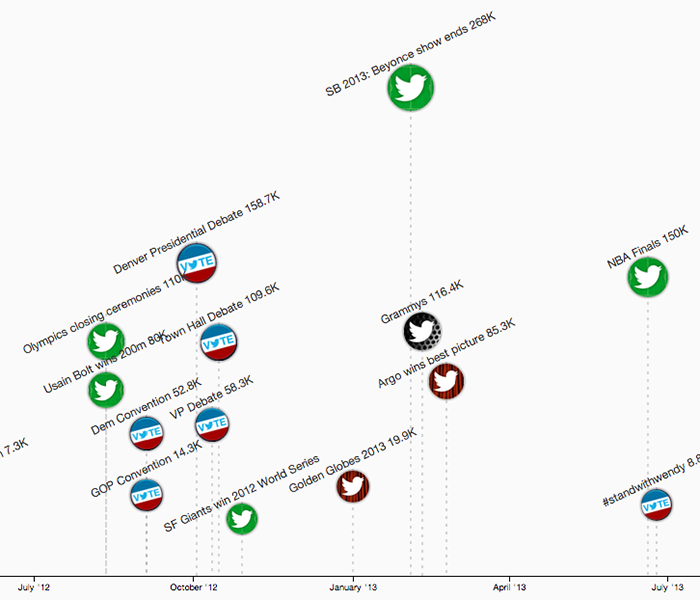 When you look at your own Twitter data around an event, what are you really measuring? When we talk about 110,000 Tweets per minute during the London Olympics or 26.7 million sent during the NBA finals, how big a deal is that, really? And how do these spikes compare to the waves of Tweets we’ve seen in the past around major events?

This is a selection of some of the water-cooler moments that really got people on Twitter talking. (Of course, there’s always a chance that tomorrow something even bigger will happen.) It’s not a complete list of the biggest moments on Twitter - this changes all the time (see what happened when Japanese TV showed Castles in the Sky). And, before you start comparing these to events that haven’t even happened yet, it’s really important to read the context further down this article.

The measurement you see is primarily Tweets per minute (TPM) — which we have written about previously. It gives you the highest number of Tweets about a specific topic or hashtag within a given minute. The number by itself doesn’t tell you much — but when comparing the TPM around different events, you begin to see how significant an event can be on Twitter.

Here are a few questions to ask:

Something else to remember: The other factors matter, too. Who are you talking to? How engaged are they? Do they follow or retweet you? Without context and interpretation, numbers are just numbers.

Have you seen any innovative uses of Twitter? Email us at mediablog@twitter.com.