Twitter has come together with the independent members of the Cross Government Working Group on Anti-Muslim Hatred (AMHWG) as part of a shared commitment to counter hateful conduct online. We want to tackle anti-Muslim hatred together, while also working with other groups who share this commitment. Together, we wanted to provide a joint update on some of the work we have been doing and, critically, we want to emphasise the importance of making data available to enable vital research in this area.

Transparency is core to everything that we do at Twitter and we are the only major service to make our public conversation data available for the purposes of study. Sharing meaningful public data to empower third-party research across government, industry and civil society is critical to ensure platform accountability, and we are happy that we at Twitter have been industry-leading in this way.

Throughout the Covid-19 pandemic, with the global community focused on how to stay safe and reduce the spread of the virus, it may have seemed that issues such as extremism or hate crimes have become less visible. However, the 2020 AMHWG report that analysed the spread of Islamophobia online - looking at a range of social media platforms - documented how anti-Muslim conspiracy theories, false information and memes have in fact been amplified in the midst of lockdown restrictions.

Against a backdrop of Covid-19 and rising concerns around inequality and polarisation, the report authors wanted to assess the impact of the potential online harms occurring on social media. The report, commissioned by the Chair of the independent members of the AMHWG, was carried out by Professor Imran Awan and Roxana Khan-Williams who found that Islamophobic online ‘Cyber Hubs‘ were being formed, which linked Muslims to the spread of Covid-19, spread anti-Muslim memes and shared false information.

As a public service, critical research can be undertaken on Twitter through a range of methods. Case studies featured on the Twitter website show the benefit of this publicly accessible data. Critically, Twitter data has enabled experts like Professor Awan and others from the Anti-Muslim Hate Working Group to conduct vital research; it also means that Twitter can develop solutions in partnership with experts.

Impact of Covid-19 and shift in online trends

Twitter has policies against abuse and hateful conduct; and our rules are developed in conjunction with external experts on our Trust and Safety Council - which includes Muslim advocacy and UK safety organisations. Indeed, much of the content identified by this critical research undertaken by Professor Awan and Roxana Khan Williams, was removed for breaking the Twitter Rules when reported by the research team.

The report also revealed the important link with dehumanising language and offline harm. Twitter prohibits the dehumanisation of a group of people based on their religion; language that makes someone less than human can have repercussions off the service, including normalising serious violence.

The AMHWG’s report highlights that this is an important moment for all of us, and the rapid spread of negative narratives can sow distrust that may pose longer term risks to cohesion, integration and living in a hate-free country. Another concern is that this shift in narrative indicates a growing risk that online Islamophobic narratives have been incubated during the lockdown and may act as a trigger for unleashing a renewed rise in hate crime in a post-lockdown context.

Moving forward, it is vital that we have a whole-of-society and solution-based approach to tackling online hatred. Anti-Muslim hatred and other forms of prejudice that are formed and reformed in the digital age require innovative and forward-thinking solutions.

One of Twitter’s key collaborations to date has been our joint participation in Imams Online. In 2019, we hosted the Imams Online Digital Summit at Twitter UK, bringing together Imams, social media activists and community leaders, including members from the AMHWG, to provide training on how to use Twitter effectively to amplify their messages, and to discuss anti-Muslim hatred online. Similarly, earlier this summer, Twitter participated in a joint livestreamed discussion on the AMHWG research.

In the coming months Twitter and the AMHWG will jointly host a roundtable discussion, where we’ll be inviting others who share our commitment of countering hateful conduct online, to work together in establishing further practical steps we can take to reach our shared goal.

Twitter has been working in partnership with the AMHWG since 2014, which has enabled experts such as Professor Awan to deliver important training on his groundbreaking research on the different types of anti-Muslims hatred on social media.

Critically, we can only develop scalable solutions by working in partnership with experts. We look forward to working with the AMHWG and others who share our commitment. 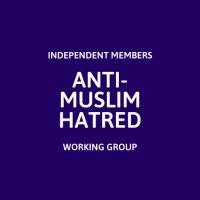